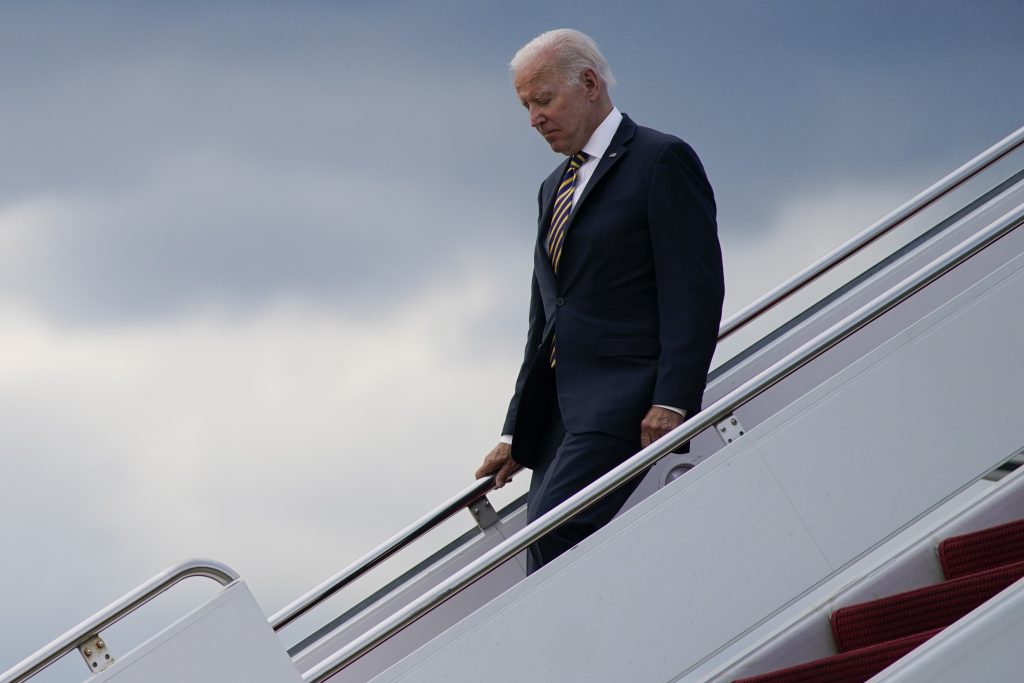 Beware of what you wish for. Last week, First Lady Jill Biden spoke to a small crowd of donors in Nantucket about the pitiful set of obstacles poor Joe faces. President Biden, she said, “had so many hopes and plans for the things he wanted to do, but every time you turned around, he had to tackle the issues of the moment.”

As the person most likely to know that Biden was incapable of addressing these issues, Jill Biden should be the last to complain. Who but his wife would be most aware of the president’s obvious cognitive decline? And as the wife of a vice president for eight years, who else should know that it’s a president’s job to fix problems?

In a gamble gone horribly wrong, Jill Biden and her Democratic Party cronies allowed a significantly deteriorating man to participate in the greatest bait-and-change scheme. Supporting him as the moderate alternative to an ineligible progressive like Bernie Sanders, Biden has been hidden from the American public in his basement. And as soon as he was elected, he veered as far left as Bernie.

But the leader of the world’s superpower has now shown enough blunders and missteps to lose the support of the very people who handed him the nomination. A recently released New York Times/Sienna College poll showed nearly two-thirds of Democratic voters don’t want Biden running again in 2024, and just 13% say the United States is on track.

The poll was released just a day after The New York Times, previously one of Biden’s biggest cheerleaders, reported that some White House staffers are questioning whether the president can handle a campaign of 2024 and cited the increasing number of blunders in his speeches and a noticeable worsening. of his gait.

Were it not for the colossal consequences, one would almost pity Biden. And the mockery of his condition has drawn unwarranted but unintended derision to the millions who suffer from the truly pitiful disease of dementia. But pity for a president so obviously overwhelmed has placed the superpower on dangerous footing, both at home and abroad.

The severity and gravity of his incompetence has become clear over the past two weeks.
Biden’s recent jaunt to the Middle East was an avowed attempt to reestablish US ties with allies in the region and prevent “a vacuum being filled by China, Russia or Iran.” But with approval ratings hovering around 30%, the president essentially set out to reconnect with the American people, gas canister in hand. In a neighborhood where force is the ultimate arbiter of diplomacy, he should have opted for a staycation.

Nothing evokes weakness more than a photo op of an American president, with the lowest approval ratings of any modern American president, shaking hands on a tarmac with an Israeli interim prime minister and a prime minister. outgoing whose party should not even pass the electoral threshold in the next elections. Standing next to a dethroned Bennett must have made Biden grateful for the American political structure that shields him from a similar vote of no confidence.
The Jewish state, however, has little to be grateful for. Seeking American assurance regarding Iran, Israel was given no ironclad guarantees except Biden’s weak acquiescence to military force “as a last resort.” And Lapid can spring from the newly signed Jerusalem Declaration, reaffirming America’s commitment to Israel’s security, and hang it ceremonially in the cabinet meeting room. But that pledge seems only worth the paper it’s written on, as Biden simultaneously pushes to join the JCPOA. This insistence has been accompanied by a renewed commitment to the two-state solution and new commitments of hundreds of millions of US dollars for the PA and the United Nations Relief and Works Agency for Palestine Refugees ( UNRWA).

But Biden also came home empty-handed. In addition to further blunders and blunders, the Saudis have refused to turn up the oil spigot without a decision from OPEC+, (nations allied with OPEC to raise oil prices, including Russia). And the United Arab Emirates has even announced its intention to send its ambassador back to Iran.
Worst of all, the trip itself triggered another trip – President Putin’s visit to Iran last week. It was filled with its own photo op, showing Presidents Putin, Raisi and Erdogan all holding hands. And the Russians and Iranians have shared their own signed declaration, with a memorandum of understanding worth $40 billion between their countries’ oil and gas producers.

It wasn’t a coincidence and it wasn’t encouraging. But that was to be expected. A weak president, who destabilizes his own country by paralyzing its energy production and generates spiraling inflation through uncontrollable public spending, cannot avoid his enemies thumbing his nose at him.

Biden’s political disasters have garnered scorn not only internationally but also at home. And by the very people who asked him to follow these policies. With a red wave predicted for the coming midterms, leftists now see him for the albatross that he is and want him out of the way. In a perverse political irony, they are ready to shoot the messenger carrying their own message.

As the midterm elections approach, the Biden administration must have looked forward to the trip to the Middle East, counting on a spectacle abroad to distract from domestic issues. Instead, he highlighted them. It also shed light on a president who has become the laughingstock of the world. And it exposed the people who enable it, most of whom now have buyer’s remorse.

But you can only fool some voters once in a while. While grumbling in Nantucket, the First Lady added of the president, “He just got thrown so much stuff.

No, Jill. It’s the American people that so much has been thrown at. And in November, hopefully, they will elect representatives who know how to handle them.