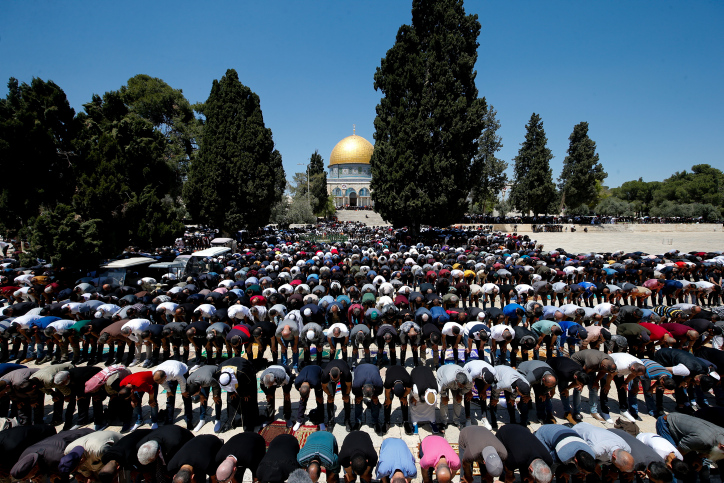 Using Ramadan as a battle cry to promote escalation

There has been a history of violence during the Muslim holy month of Ramadan in recent years, but it’s not like Islamic law calls for an escalation of escalation during this time. There has been an effort by those who wish to promote violence to use Ramadan as a battle cry to mobilize forces, to mobilize people. And there really is no basis in Islamic theology for doing that.

It is true that there were important Muslim victories at the time of Ramadan, when Islam was just beginning. Muslims all know about the Battle of Badr. It was the first battle between the Muslims and the people of Mecca on the 19th of Ramadan in the year 624. It was a tremendous victory for the Prophet Muhammad, and that is why it is commemorated. But the date is a coincidence. It was not a religious plan.

Nine years later, in the year 632, the conquest of Mecca by Muhammad and his armies took place on the 20th of Ramadan. Thus, Ramadan is associated with the moment of the victory of the Muslim armies. It should not have been surprising that some Egyptians called the 1973 war the Ramadan war. Some have called Ramadan a month of jihadbut it’s not as if, in their religious tradition, you have to wage war on Ramadan.

A few years ago the idea was put forward that we should have cameras on the Temple Mount to see exactly who is smuggling weapons into Al-Aqsa Mosque. The idea was to catch them in the act, and it seemed like a smart move. But the Muslim religious Wakf and the Jordanians who sponsor the Wakf have opposed the idea.

When I was Director General of the Israeli Ministry of Foreign Affairs, a delegation visited Abu Dhabi. The Sheikh Zayed Grand Mosque is one of the most beautiful mosques in the Muslim world. When we went to the mosque, there was no problem with me wearing a yarmulke because the UAE believes in universalism. Inside the mosque, I looked up at the ceiling and saw security cameras – the same cameras that we wanted to install in Al-Aqsa Mosque and that everyone was making a fuss about. But in the Sheikh Zayed mosque, no one objected.

Later, I researched what is happening at the Grand Mosque in Mecca in Saudi Arabia, looking at photos and films, and I saw the cameras that had been installed in the Grand Mosque. Thus, the cameras were correct for the Grand Mosque of Mecca and for the Sheikh Zayed Mosque. But for some reason, security officials on the Muslim side felt reluctant to allow cameras into Al-Aqsa Mosque. And that was only an invitation to disaster in the following years.

The Muslim Brotherhood is behind the incitement

When I was in the Israeli government for the first time between 1996 and 1998, I had to deal with the aftermath of Sheikh Raed Salah. For example, one of his ideas was to go up to the Temple Mount and clean the cisterns meant to hold water, and to bring water to the Temple Mount from the holy well of the Zamzam Spring. in Mecca. It wasn’t just our security forces who raised their eyebrows when they heard about the Zamzam plan. The Arabs themselves were concerned.

Sheikh Raed Salah lives in the Galilee where he sponsors mass gatherings with huge signs in Arabic saying “Al-Aqsa is in danger”. It was really fanning the flames of Muslim concern that the Jews were going to take control of Al-Aqsa and drive them out, even though no one was planning for that. No one had mentioned it. But it was a very dangerous conspiracy theory to promote. And it took a lot of work on Israel’s part to allay those concerns.

It’s calmed down a bit, but it’s something we have to watch very closely. Freedom of religion and freedom of expression are fundamental to Israeli democracy and we must protect them. But we also work in a context where religious incitement is rampant in the Middle East. You have to achieve some sort of balance so that you can keep Jerusalem open and free and not have a city where there are religious concerns jihad and things like that, and maintaining that careful balance is something that Israel specializes in.

Prayer on the Temple Mount

In 1967, Moshe Dayan, Israel’s Minister of Defense during the Six Day War, established the rule that Jews could visit the Temple Mount but they could not pray there. Today, by popular demand, Jews now go to the Temple Mount where they pray in private, not in obviously organized public prayers. The rules have changed and I think that’s a good thing.

When we visit religious sites around the world, for example in Rome, if you go to St. Peter’s Basilica in the Vatican, you will see people of different faiths there and St. Peter is open to all religions. It is extremely important that Israel, as custodian of the holy sites in Jerusalem, follows precedents in the world where there are free and open religious sites. That’s what others in our international coalition of democracies are doing, and that’s what we should be doing.

I don’t think we should impose ourselves on Muslims. On the contrary, we must respect their religious sensitivities. But at the same time, a place like the Temple Mount should be open to all faiths. And frankly, I firmly believe that only Israel can protect religious freedom for all major religions. We have done it in the past and we will do it in the future. But it will take a lot of expert diplomacy to make it work.

The role of the media

The media have a huge responsibility in these matters. They shouldn’t become conduits for a whole mythology that someone is planning to destroy someone else’s religion. We must also be aware of the sensitivity of certain periods of time and ensure that Muslims feel reassured about the protection of their interests. Don’t send pen pals to sensitive areas of the Muslim world at sensitive times and have them run like a bull through a Chinese store and create a lot of historical animosity.

I believe we can coexist. I have had meetings with Muslim colleagues from the Arab world and we understand each other. This is what must happen. I believe it can happen and that is what we should promote.

The evolving role of Saudi Arabia

In the early 1990s, I wrote a very provocatively titled book about Saudi Arabia called kingdom of hatreds, and I have continued to monitor what has been happening in Saudi Arabia ever since. Many of the early engagements of the jihadist world to religious war arose in the years 1998 until 2005. Then after 9/11 in Saudi Arabia there was an overhaul that happened. I have noticed very significant policy changes that have not received the proper coverage they should have received in the media.

When I wrote my book on Saudi Arabia in 2003, the Saudis were funding 50-70% of Hamas’ budget through these huge international charities. Then after the second intifada, the second uprising among the Palestinians, we had a lot of evidence of how the money was flowing and why it was happening. But the Saudis suddenly stopped supporting Hamas and they stopped giving it large sums of money. The money then came from Iran, not Saudi Arabia. It is worth noting and giving them credit for it, as it is a fundamental shift in policy that could make possible an understanding and even an eventual peace agreement between Israel and Saudi Arabia. All is not pessimistic.

Geopolitically, we have a growing danger in the East with the Islamic Republic of Iran. Iran is developing a nuclear weapons program and says Israel should be wiped off the map. We have to be very aware of what they are doing and be careful to neutralize a program like that.

I think it is possible that the states of the Middle East, especially the Gulf states and Israel, can find common ground to work together, especially to stop the Iranian threat. Iran does not have to be Israel’s inevitable enemy. Iran and Israel got along before and could get along again.

But there must be a fundamental change in behavior because, alongside the nuclear weapons program, Iran has been active in promoting the spread of revolutionary organizations across the Middle East, from Morocco in the west to Iraq to the east. These organizations threaten the stability of a wide variety of regimes, and they are a threat to Israel. We need to work with our Arab neighbors, especially in the Gulf, and see if we can create a more stable region. The basis for doing so is there. What would make a big difference is for the United States and European powers to work with us to support such an effort if we undertake it ourselves.