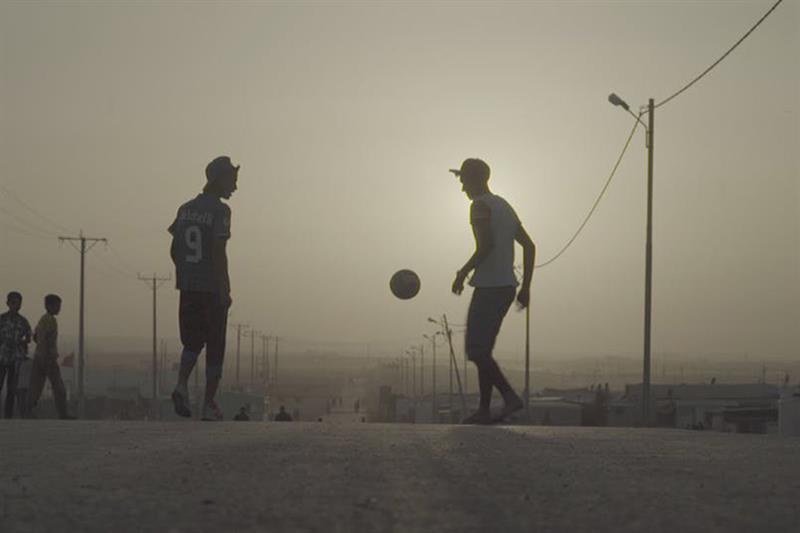 At the Fifth El Gouna GFF Film Festival, the Arab premiere of Amira and the Captains of Zaatari was held. Two feature films by Egyptians, respectively Mohamed Diab and Ali El Arabi, they depict the life of Arab characters outside of Egypt – which is unusual for Egyptian cinema. Amira deals with the social and cultural life of an occupied Palestinian family, while Captains of Zaatari is a documentary about the dreams and aspirations of two football-obsessed boys in a Syrian refugee camp in Jordan. The two are different in terms of perspective and approach from previous films exploring Arab issues.

For El Arabi, the selection of his first film to premiere at the Sundance Film Festival was a dream come true. Another pleasant surprise was the positive response from the festival audience of different nationalities and origins. â€œThis may be due in part to the fact that the dramatic structure of Captains of Zaatari is close to that of a fictional film,â€ he says. “There is also the dream, the hope and the friendship that unites the two boys who grow up in front of the public in seven years of filming.” Yet the Middle East premiere at El Gouna, where the film won the Gold Star for Best Documentary, was of a different order. â€œThe El Gouna Film Festival supported the film at a crucial stage. We came to the CineGouna platform in post-production, after an arduous production journey, to present parts of what we filmed, and that’s how we ended up having co-producers. For foreign audiences, the friendship between two teenagers who dreamed of becoming professional footballers was at the heart of the story. For an Arab audience, however, the film had all kinds of political dimensions, even though its writer sought to avoid politics. That’s why El Arabi was concerned about the local response, and that’s why the payoff was doubly satisfying.

â€œIt was a bit risky to make such a film, says El Arabi, because we had to follow the daily life of his characters in the camp for seven years without knowing where it would lead us: will they become professional players, give up and stay in? the camp, or will they return to Syria? All roads lead to my film, but the uncertainty is unpleasant for the producers. This is why Ali decided to take the risk of producing his film with his own sources, and then to look for partners. He feels he did the right thing. â€œIf I could go back in time, I wouldn’t hesitate to make the same decision.

For many years El Arabi worked as a war correspondent for a news channel, during which he directed dozens of television documentaries. “But I had often felt guilty for feeding on the agony of victims of war who are just numbers and statistics for reporting, not human beings who have their hopes and dreams.” After a short time away from the news channels, he decided to tour refugee camps in 22 different countries so as not to be a passive observer. Its aim was to convey the stories of refugees from a closer and more human perspective. This is how he met Mahmoud and Fawzy in Zaatari in 2013. â€œWhen Fawzy asked me: ‘How is life outside the camp?’ I felt that to him we were aliens carrying cameras and chasing his life. At this point, El Arabi decided to stay a week or two to film, but the process took six years and 700 hours of footage.

Despite El Arabi’s background as a journalist, the structure and style of Captains of Zaatari is different from that of the news. He set out to free the work from expectations and prejudices, as he had no intention of showing the film in a festival or channel or an interest in persuading producers to support him. â€œI wasn’t afraid of failure, dissatisfaction or losing money, and my team supported me tremendously. We never interfered with the course of events or directed the characters in any way. We filmed so many recurring events of which we chose the most expressive during the editing phase, and it was quite a challenge. He adds that he has become closer to Mahmoud and Fawzy than to his own brothers, which is reflected in the way they appear on camera. They were more inspiring than others because of the â€œdream and their friendshipâ€: â€œI can meet Mahmoud and Fawzy in India, China, Egypt, Tunisia – anywhere. Anyone will feel that they have something in common with their story. At their age, I had a similar experience myself. I dreamed of being world boxing champion in my poor village of Mansourah, and it was seen as madness. This is what he chose to make his fiction debut on. He is writing it.

The film may have cost El Arabi, but what he got from it on a personal and professional level is second to none. “It’s a claim that I can tell the stories I want however I want, and that a documentary can be popular, at least Western audiences have so far, and that it can be successful without a famous producer, director or actor as long as people believe it. This film changed me, it put me on the map as a director and producer. Through this film, I realized that as a generation, we can make films on our own without tutors. â€

For his part, Mohammed Diab’s Amira was presented in preview at the Venice Film Festival, where he received an impressive reception and won three awards. â€œI saw how Amira’s story pierced the hearts of the audience, who were touched by her journey,â€ he says. â€œOn the other hand, the critical praise was pretty important to me. Diab was proud to show the film to El Gouna and confident that Egyptian and Palestinian audiences – who mattered most to him – would respond positively to such a “quick, exciting and mysterious” story as it was moving. This is Diab’s third feature film, and it’s the story of a young woman under occupation inspired by the idea – which he and his wife and producer Sahar Johar read years ago – of inmates Palestinians taking their sperm out of Israeli prisons so that their wives can have children in their absence. Working to develop the primse as a team with Johar as well as his brother Khaled and his sister Sherine, Diab imagined “a Greek drama full of existential questions”. That’s why he thinks the film is universal.

Diab thinks it’s risky to make a film about â€œa world other than yoursâ€. You risk being harshly judged even if you don’t trip. â€œOur collective decision as a team, from the first moment, was to explore this world through familiar eyes. My dear friend, Palestinian director Hany Abu Assad, my role model, was the first person I turned to, along with his wife, producer Amira Diab. They were our partners in the project, from writing the script to filming. With the exception of directing, cinematography, and editing, the cast and crew were all Palestinian, and they include stars such as Ali Suleiman (who was already on Diab’s mind as he wrote the screenplay), Saba Mubarak, Ziad and Saleh Bakri. He focused on the human side of the Palestinian experience and on the gray reality as opposed to the black and white reality of life, taking the opportunity to explore a world he was unfamiliar with. The spirit of independent cinema in Palestine and the support of Abu Assad opened many doors. Written in Egyptian dialect in collaboration with Abu Assad, the script was then translated into Palestinian dialect, allowing the actors to add their own individual variations.

As for the choice of Tara Abboud in the role of Amira, a bewildered character faced with the question of who we really are, Diab says she was nominated by Saba Mubarak, who played the role of Warda, because she had already worked with her . â€œWhen I met Tara at the audition, I was fascinated by her angelic and severe features, as well as her natural talent as an actress. I felt that she was the girl I was looking for. Tara has a special talent. and I expect her to achieve a global position if she continues to cultivate this talent.

* A version of this article is published in the October 28, 2021 edition of Al-Ahram Weekly

Baranyai: A royal marrying a commoner? Let go of the dogs!