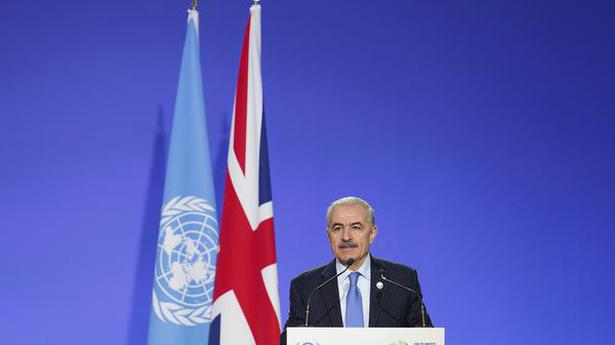 India can play a stabilizing role by maintaining cooperation with ‘all related parties’, he says

India can play a stabilizing role in West Asia by maintaining cooperation with “all related parties”, Palestinian Prime Minister Mohammad Shtayyeh has said.

In a statement issued after meeting Prime Minister Narendra Modi on Tuesday in Glasgow on the sidelines of the COP26 summit, Shtayyeh said India had a historic tradition of supporting the rights of the Palestinian people and that its technical support should be “parallel to political support”.

“We look forward to a well-established and distinguished Indian role in the Middle East [West Asia] based on the historical perspective of India’s foreign policy, the principal of which is to support the right of the Palestinian people to self-determination and the establishment of an independent State of Palestine, with Jerusalem as its capital,” said said Mr. Shtayyeh.

Shtayyeh said India’s role in multilateral organizations requires “strenuous efforts in cooperation with all parties concerned to ensure security and stability in the Middle East and West Asia”.

The meeting, although on the sidelines of the World Summit on Environment and Climate Change, is significant because it comes shortly after the four-day visit to Israel by External Affairs Minister S. Jaishankar. The visit was widely commented on because it ruled out a trip to Palestinian territory.

The Palestinian leader stressed that India has an important role to play in international affairs due to its rising profile.

In recent years, India has broken the tradition of supporting Palestine at the UN. In 2019, India voted in favor of Israel at ECOSOC (Economic and Social Council) to deny observer status to a Palestinian organization named “Shahed”. In June this year, India abstained from voting on a resolution calling for an investigation into Israeli actions in the Gaza Strip at the Human Rights Council, which drew strong protests from the minister. of Foreign Affairs Riyad Al Malki who wrote a letter criticizing India’s abstention.

Shtayyeh, who attended the COP26 summit earlier, made headlines for saying the Israeli occupation threatens the Palestinian environment.

Threat to the Palestinian environment

“We are here to tell the world that the Israeli occupation is the most critical long-term threat to the Palestinian environment,” Shtayyeh said as he read his comments as head of the Palestinian delegation on Monday.

Mr Modi also met his Israeli counterpart Naftali Bennett on Tuesday before leaving for New Delhi and invited him to India to mark the 30th anniversary of the establishment of formal diplomatic relations.

Mr. Shtayye appreciated India’s financial and technical support. “This support must be parallel and complementary to the political support of the Palestinian cause and in a way that guarantees the implementation of the resolutions of international legitimacy.”

The meeting between Mr Modi and Mr Shtayyeh is the first between them since February 2018, when Prime Minister Modi visited Palestine months after making a standalone visit to Israel.

Firekeepers CEO named one of Michigan’s Most Powerful Women