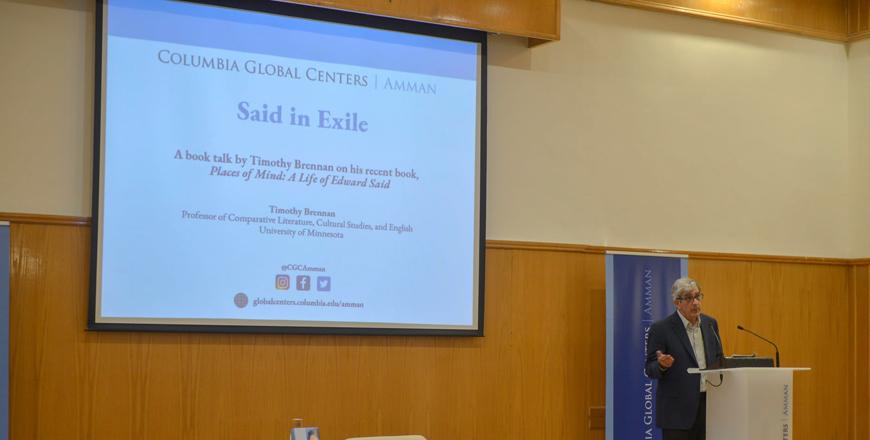 Ammon news – The global influence of famous Arab-American intellectual Edward Said remains in all corners of the world, according to an American scholar.

During a conference called “Said in Exile”, organized by the Columbia Global Centers in Amman on Tuesday, Timothy Brennan, professor of comparative studies, literature and English at the University of Minnesota, spoke about his book recent “Places of Mind: A Lifetime of Edward SaÃ¯d”.

â€œThere are a lot of things to consider when talking about a person of immense global importance that was Edward,â€ noted Brennan.

Said made “a clear distinction between refugees and economic immigrants” and he identified strongly with Palestinians who were driven out of historic Palestine by Zionism, Brennan said.

He added that although his family voluntarily moved from Jerusalem to Cairo to develop a family business, “he felt the pain of his fellow Palestinians who were driven out.”

He said Said played a very important role in the political arena when the West harbored anti-Arab sentiments, believing that literature had a dramatic effect on politics.

The question of “Said’s Arabity is linked to the question of his Arabic language,” Brennan said, adding that he would get angry with Arabs who would strike up a conversation with him in English.

Moreover, Said always linked literature with politics, and in the works of Plato, Milton and Ibn Khaldoun he found didacticism, Brennan said.

“He left us with ideas that are both political and literary and that everyone has the right to tell their story, universities as utopian spaces whose role is to summon intellectuals as custodians of the historical record,” said Brennan. .

Israel-Palestine: risk of “murderous escalation” of violence, without decisive action