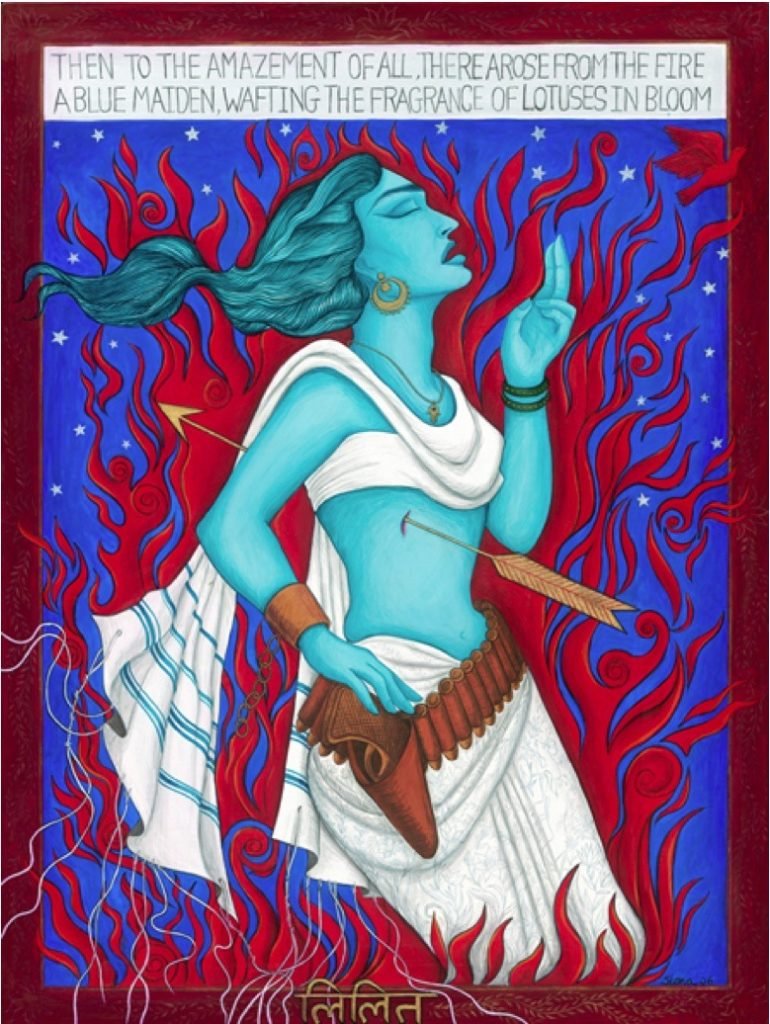 Iconic is the most misused word in our language, but for Siona Benjamin’s work, the word often fits. The best of his paintings evoke universes of multiplicity where the myths of many nations cohere and inspire. “Beyond Borders: The Art of Siona Benjamin” (at the Jewish Museum Milwaukee until September 25) is unlike anything else in contemporary or historical art for its particular symbiosis. His sometimes startling but always organic juxtapositions are neither sloppy nor sophomoric (as is the case with much contemporary art) but deeply felt and artfully rendered. Their sensitivity grew in the context of Benjamin’s journey.

She was born into India’s declining Jewish community, a branch of the diaspora that reached the subcontinent 2,000 years ago. Benjamin grew up in Mumbai at a time when India recognized itself as a multicultural nation; she was educated in Roman Catholic and Zoroastrian schools and had Muslim and Hindu friends without losing sight of her heritage. Since arriving in the United States in 1986, she has become increasingly aware of standing at a bustling intersection of cultural descriptors and the need to do something meaningful by being hyper-hyphenated as a woman. Jewish-Indian-Asian-American.

“She is a unique artist in many ways and over the past 20 years has achieved international acclaim with commissions from all over. His philosophy aligns with what we aim to do here,” says Molly Dubin, curator at the Jewish Museum Milwaukee. Dubin refers to Tikkun, the Jewish concept of human responsibility to fix the broken world by working for social justice.

Stay up to date with today’s news

Subscribe to our free daily email newsletter to get the latest local Milwaukee news, restaurants, music, arts & entertainment, and events straight to your inbox every day of the week, plus a bonus email Week in Review on Saturday.

One of the dominant recurring images in Benjamin’s work is a woman in blue, representing both the artist and Lilith, Adam’s first wife and wife according to the Babylonian Talmud. “She identifies herself as blue, as a Jewish woman of color,” Dubin says. “Blue symbolizes the Other without the tropes or stereotypes that people project onto other colors.” Blue is also universal, the color of the sea and the sky, the blue of our world. It is no coincidence that blue is also the color associated with many deities in Hindu iconography.

The volunteer Lilith has been a controversial, even despised, figure in Jewish tradition. Benjamin’s appropriation of her is in line with his desire to overthrow the patriarchy of Judaism – or at least to the side, making way for equal respect for Sara, Rebecca, Esther and other biblical matriarchs.

Several works from “Beyond Borders” deserve special mention. In his Seven-Panel Exodus: I See Myself in You (2016), the images in gouache, acrylic, and gold leaf on wood suggest an altarpiece for a deeply rooted faith. In colors of deep blue and vivid copper, fiery red and lush green, Benjamin depicts a wandering man shouldering a ram, a mother sheltering her child in the belly of a whale, the cry of an anguished lonely woman, and the intervention of angelic and demonic beings. The swirling background patterns suggest that existence is always on the move, and the Exodus of the title evokes the archetypal immigrant experience of an entire nation in search of a promised land. The blue woman in her paintings is often anxious to find her home or to redo it in her image.

The central image of the mixed media installation Lilith in the new world (2008) pays homage to Roy Lichtenstein’s audaciously appropriate caricature. It’s pop art turned Bollywood, with an explosive BLAM and an enigmatic thought bubble rising from Lilith: “You must save us from their wrath.” Lilith’s copper-brazed hands are brought together in prayer, her long headscarf turns into a prayer shawl, her mini-skirt is woven from Indian fabric with Edenic images of rams and lions swaying. frolic. Some of Benjamin’s statements are provocative. In a work for gouache and gold leaf on paper, Find your home #68 (Fereshteh) (2004), the blue woman is both a Palestinian refugee and a prisoner of the Holocaust, wearing a hijab and striped camp dress, speaking of the universality of oppression and survival.

“Beyond Borders” contains a multitude of sources, including the angels of Persian miniatures, the flames and arrows of Christian martyrdom, Hindu mandalas and multi-armed goddesses who transform into menorahs, amulets common in the Islamic Near East and Jewish and a mixture of alphabets (Hebrew names in Hindi, Urdu words in Hebrew) as well as 70s Indian comics and medieval illuminated manuscripts. The exhibition is about finding commonalities between religions and cultures, a visual diary of how traditions can meet and merge within one woman without losing their identity. With its many layers of meaning, “Beyond Borders” is an exhibit worth seeing more than once.

David Luhrssen has taught at UWM and MIAD. He is the author of The Vietnam War on Film, Encyclopedia of Classic Rock and Hammer of the Gods: Thule Society and the Birth of Nazism.

use culture to normalize occupation