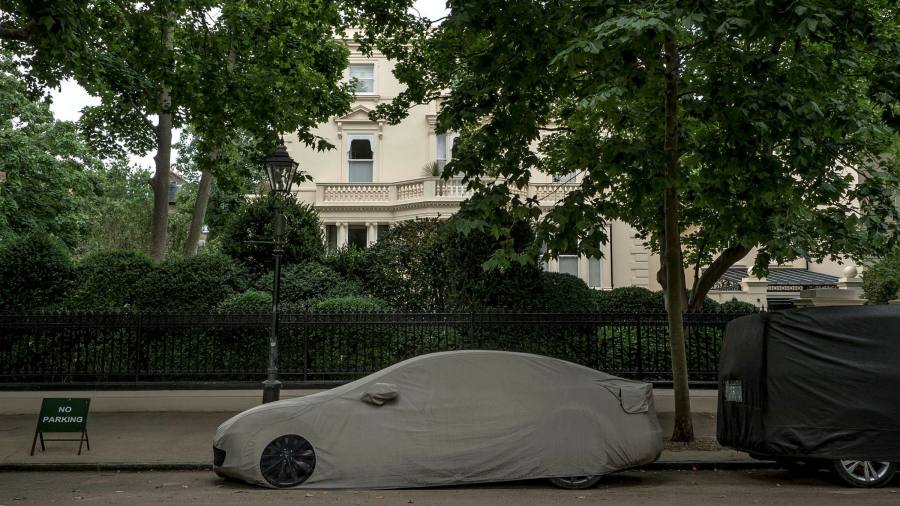 Serious Money: Walking Plutocratic London – the rise of the super-rich

Our family lived in what used to be called “genteel poverty” – the middle-class family going through hard times. My father, a literary translator, usually celebrated the granting of an overdraft extension by buying several bottles of vintage sparkling wine. My mother pinched pennies and managed a flood of tenants.

But perhaps the most remarkable aspect of the constant threat of financial ruin was how it all unfolded in the heart of Kensington on Abingdon Road – directly opposite Biba, Swinging Sixties London’s iconic fashion store, opened its first point of sale. Not only that, but we also owned the house we lived in, or rather my mom did because her parents had given her the surety. She bought the house for £5,000 in 1960.

In today’s money that would be £100,000. In fact, the same house is now said to be valued between £5m and £10m. Poverty, genteel or otherwise, is no longer an option in this part of Kensington. In areas where it exists to the north of the borough, it can come with appalling risks, as the residents of Grenfell Tower have discovered to their cost.

Memories constantly floated through my mind as I read Caroline Knowles serious money because many of the houses, streets, parks and institutions she describes in her walks through “plutocratic London” provided the very architecture of my childhood. And yet, they are completely different worlds, as Knowles makes clear in his portrayal of a city awash in money, some of dubious origin and with a detrimental effect on society and politics.

It wasn’t a house – it was a place to show off a huge art collection. The only fakes in sight were the books that lined one of the many hallways

All cities evolve, but the transformation of London during the 1990s and beyond was extreme. After the collapse of communism and the advance of market liberalization and the rise of globalization, the city entered a race with New York for the title of financial capital of the world. The result is paradoxical. London is richer, more populated, more cosmopolitan. But it’s also more corrupt and one of the most unequal and ruthless cities on the planet.

A big difference between then and now are the people; or rather the unimaginable sums of money possessed by the people who now inhabit these streets. Our house had a seedy basement, euphemistically called “the nursery”, where my brother and I lived overlooking the coal shed. Today, “basement” means something different. Knowles describes the extraordinary competitive economy of the oligarchic “megabases” of Kensington.

Basements now go deep into the earth’s crust – two, three or even four stories below. Their construction takes two to three years, causing immense damage to surrounding properties. “In one, raw sewage is flowing through a neighbor’s apartment,” Knowles reports. The lack of light and ventilation means no one actually lives in basements. Instead, they’re reserved for home theaters, swimming pools, gyms, and garages.

An old resident laments the arrival of gazillionaires and spends much of his time fighting to block planning permits for these architectural tumors. Yet, before the reader gets too foggy, the author reminds us that the money that financed the original construction of these magnificent Victorian homes came largely from the bloody legacy of colonialism. In the 1960s, the lawyers, doctors, scrupulously polite translators and occasional celebrity who graced these streets enjoyed, like me, a long tradition of plutocratic wealth.

It is true that today’s super-rich have taken the pursuit of wealth to unprecedented levels. My wife, an arts journalist, described an aperitif to which she had been invited by a very wealthy individual from the Middle East in their Mayfair residence consisting of two adjoining townhouses. “Feel free to take a tour of the house,” the host told guests. It wasn’t a house, it was a place to show off a huge collection of contemporary art, including Damien Hirst and Jeff Koons. An entire double bedroom has been dedicated to a sculpture by Cornelia Parker. The only fakes in the building were the books lined up in one of the many hallways.

Knowles quotes another sociologist, Elisabeth Schimpfössl, who asserted that “in Russia, patronage of the arts is a means of converting financial resources into cultural references”. It’s not new and certainly not limited to Russians – the wealthy of many cultures and periods, from the Florence of the Medici to the “robber barons” of the United States, have sought to do just that. To this day, many Americans will take their first steps down the road to art appreciation via the legacy of Frick, Rockefeller, Carnegie et al.

Ironically, it was a Labor prime minister and his chancellor – Tony Blair and Gordon Brown – who promoted the “light regulatory touch” that encouraged money from around the world to flow into London. The capital had real advantages over New York: it was much closer to the Middle East, Russia and, of course, the rest of Europe. It had a cultural life that rivaled its American rival, and there were plenty of large, inexpensive properties. Housing inflation pushed genteel Englishmen out of Notting Hill, Kensington and St John’s Wood, forcing them to move further west, south and north (Shepherd’s Bush, in my family’s case).

The more we enter the world of the plutocrat, the more seedy and alienated it becomes. Areas of Mayfair and Belgravia are dark at night when houses are uninhabited

Naturally, Knowles begins his plutocracy walks through London’s financial district in order to take a closer look at the engine behind much of the city’s wealth. His models include Virginia Woolf strolling the wintry streets of London, Walter Benjamin in Paris, Raja Shehadeh’s exploration of the Palestinian territories and, more recently, Iain Sinclair’s London walks.

It’s a worthy pursuit, but Knowles’ overture fails because it’s also trying to investigate opaque networks of tax evasion, money laundering, and rent-seeking. Writers like Oliver Bullough (moneyland), and Nick Shaxson (treasure islands) and Tom Burgis of the FT (Kleptopia) have already gone there with such forensic force that there are no new discoveries to be made.

Persisting with the book, however, still reaps rewards as the author’s sweet but shrewd observations quickly add up as he seeks out a wide variety of individuals to reveal the everyday culture of plutocracy. Knowles names them by archetype: Butler, Soviet, Banker, Bags (as at Prada), Sturgeon, Blazer and many others. It’s both frustrating (even if you don’t know them, you want to identify them) and effective. Reduced in size, the characters are easier to follow and understand.

The more we enter the world of the plutocrat, the more seedy, alienated and moribund he becomes. In Mayfair and Belgravia, large spaces darken at night because these large houses are uninhabited. Either they are an investment with a solid return or, like the art gallery of the Middle East, they aim to project an image of wealth and prestige. Mayfair’s pockets of light herald the most exclusive nightspots where hideously wealthy men in their 40s and 50s spend £10,000 a night to book a top table.

As Knowles writes, “promoters” scour nearby streets (and the internet) offering “girls” the chance to party for free. “Young women live on the ambiguous, slippery edge of the night, part guest and part offering,” she adds. “They must navigate the sliding scale between, on the one hand, accepting expensive drinks and providing conversation, and, on the other, escort services, casual sex or even high-end prostitution tasks. range for rich men.”

The mega-rich can afford to buy people. And they invariably keep plenty of entourages that do everything from folding their pants to scanning hotel rooms for listening devices. The shrewd assistant doesn’t just act as a factotum for his boss, Party. It also ensures friendship. This is of course not a real friendship because Party, a billionaire, is a paying assistant. But billionaires, Knowles demonstrates, live in a world so rarefied that they never meet the common people. This leads to the author’s sad conclusion that the life of a plutocrat is hopelessly lonely. As the assistant tells Knowles: “[Staff] become your surrogate family, because these are the people you spend all your time with. These relationships, the aide adds, are “misaligned” because the wealthy ultimately want – and pay for – both services and companionship.

As described, it is very sad. But it’s hard to feel too sorry for them because the influence of the global oligarchy fashioned from the excesses of capitalism bears deep responsibility for the appalling mess we all find ourselves in now.

Misha Glenny is rector of the Institute for Humanities in Vienna