Coffee, revered for its taste, aroma and caffeinated properties, has its time at the LA Mayer Museum of Islamic Art in Jerusalem with “Coffee: East and West,” an exhibition focusing on Israeli coffee habits as well as history and innovations of the brewed drink.

The exhibit opened in July and will remain in-house until April. Three of the museum’s main galleries are devoted to all coffee-related matters, with particular emphasis on java habits from this corner of the Middle East.

“Everyone has their own coffee culture and customs for preparing it,” said curator Yahel Sheffer. “Morning coffee is not the same as 10 am coffee or 4 pm coffee.”

Sheffer, who also studied culinary and gastronomic arts in France, started thinking about coffee while working on a Foreign Office exhibit on the origins of wine in the three great religions. It was a subject that touched on other drinks, including coffee.

“I learned how rich its history is,” said Sheffer, who spent five years researching the subject. “It’s the product that has no equal. Neither tea nor rice has had this kind of journey and journey.

By registering, you accept the conditions

The exhibit showcases the origins of coffee – its discovery in Ethiopia and its subsequent spread to Yemen and beyond, reaching Mecca and Cairo in the late 15th century. It was the Ottoman Empire that made coffee known, distributing it on its trade routes and serving Turkish coffee in cafes in the familiar short coffee cup with the grounds resting at the bottom.

From the “Coffee: East and West” exhibition at the Museum of Islamic Art in Jerusalem which will close in April 2022. (Credit: Elad Sarig)

Part of the exhibit is dedicated to the Turkish influence on coffee, with an impressive display of coffee sets, including a particularly fun demitasse mug designed for mustached drinkers, all on loan from Turkish collectors Murat and Nihal Bursa.

The exhibition then turns to the history of Israel with coffee, including the fact that coffee cultivation in Israel – an idea pursued for a few years – was abandoned because it was too expensive.

There has always been the tradition of Arabian coffee, in which coffee is brewed in a small saucepan over a fire and then poured into a finjan, a small, handleless, Turkish-style espresso cup.

When the German Templars settled in the Holy Land, they brought European traditions of filtered coffee. This culture of drinking coffee was reinforced by the British Mandate period in Palestine in the 1930s and 1940s, as well as German Jews who later opened cafes similar to those they had frequented in Europe.

“In Jerusalem, people would drink Arabic coffee for their first coffee of the day, then later sip European coffee with cake in the afternoon,” Sheffer said.

Coffee collections on loan to the Museum of Islamic Art in Jerusalem for the exhibition “Coffee: East and West” which will end in April 2022. (Credit: Elad Sarig)

While the Israelis did not grow their own coffee beans or build sabra espresso machines, a local coffee-related industry sprang up: artisans, many of whom were born in Europe, designed ceramic coffee sets. and metal which reminded immigrants of the coffee sets used at the time in the old country.

The “Coffee: East and West” exhibit includes extensive collections of these sets, which are part of what is known as Israeliana, souvenirs made in Israel, and household items that are now considered collectibles. There are also coffee tins from the 1940s and 1950s and advertisements for Atara Coffee and Landwer Coffee, coffee roasting companies that eventually opened cafes (Landwer still exists).

There is also a whole wall of coffee machines, both stylish and modern and incredibly old, many of which have been on loan from local collectors.

“I met people and they introduced me to others,” Sheffer said.

One of those coffee lovers is Yoav Kayam, 78, who collects coffee-related technology, books and memorabilia throughout his long career with a jewelry company with offices in Italy.

“They don’t actually grow coffee beans in Italy, but they have a perfect grasp of the technologies of coffee making,” said Kayam, who “got stuck on coffee” during his many work trips to the known country. as the coffee capital of the world.

Kayam’s own mother always drank Elite Instant Coffee, a habit he never disparages because “the best coffee is the one you love.” However, as a lifelong collector of many different items, Kayam discovered coffee culture through espresso machines designed and developed in Italy. And he started lugging some of them around the house.

“I don’t count how many I have in my collection, and I don’t spend a lot of money, I buy them on the cheap,” Kayam said. “But if I find something that I don’t have, and it’s unusual, I must have it.” 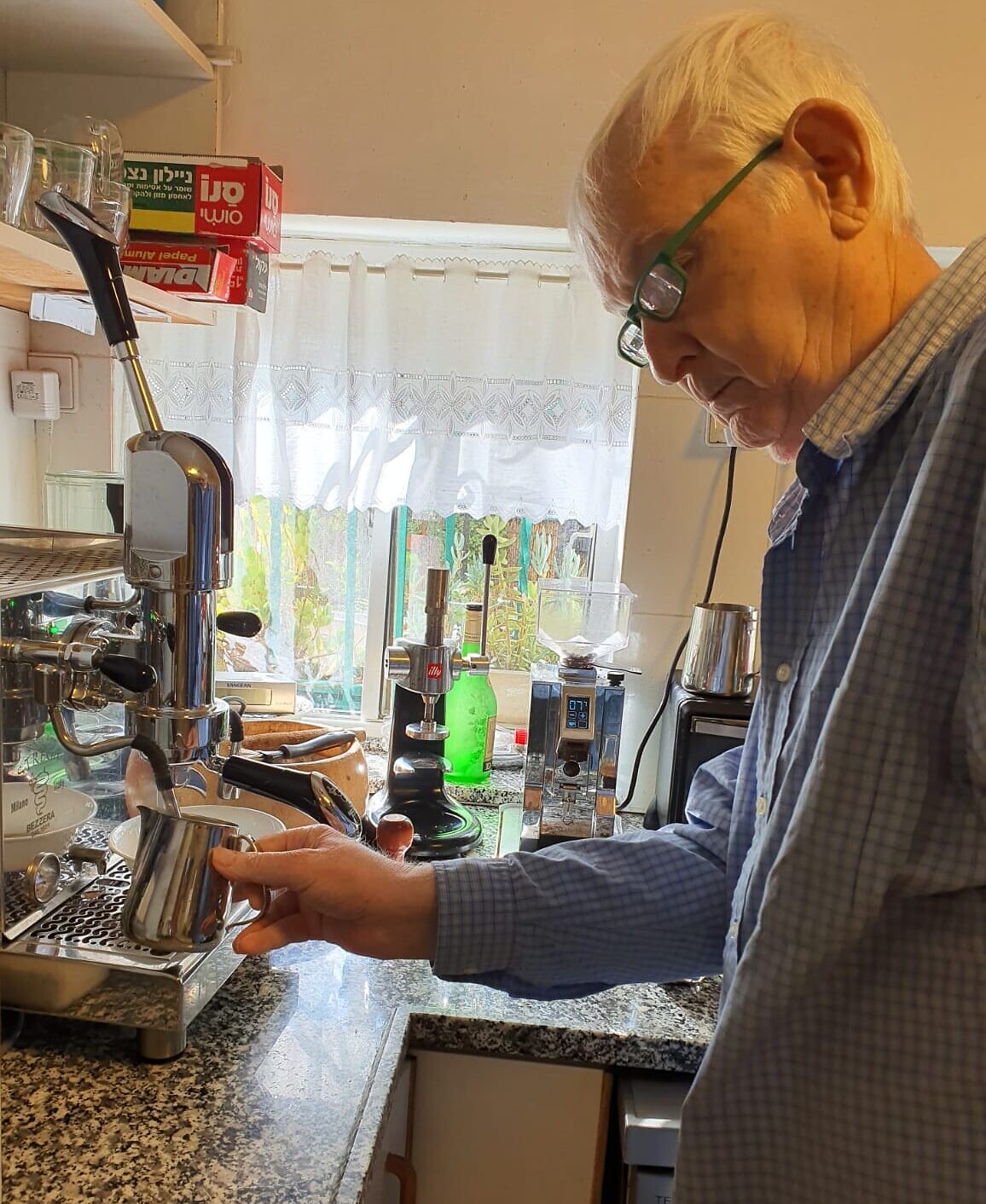 His favorite? A Bezzera, created by Milanese inventor Luigi Bezzera, who came up with the idea of ​​forcing pressurized water through ground coffee to produce the short, concentrated drink known as espresso. According to several accounts written on Bezzera, espresso was so called because it could be prepared expressly for each customer and the water had to be expressed through the coffee.

“The sound of the espresso being brewed is as sweet as snow falling on the ground,” Kayam said, referring to his espresso machine with poetry.

Iris and Ram Ivgi, owners of Coffee-Tech Engineering, an Israeli company that makes coffee roasters, are another group of coffee enthusiasts who have loaned items to the exhibit.

“It’s very emotional because whoever loves coffee connects you to others,” Sheffer said.

Drinking java is a social tool, said Kayam, who doesn’t drink as much coffee now that he’s retired, but loves nothing more than drinking coffee with friends old and new. 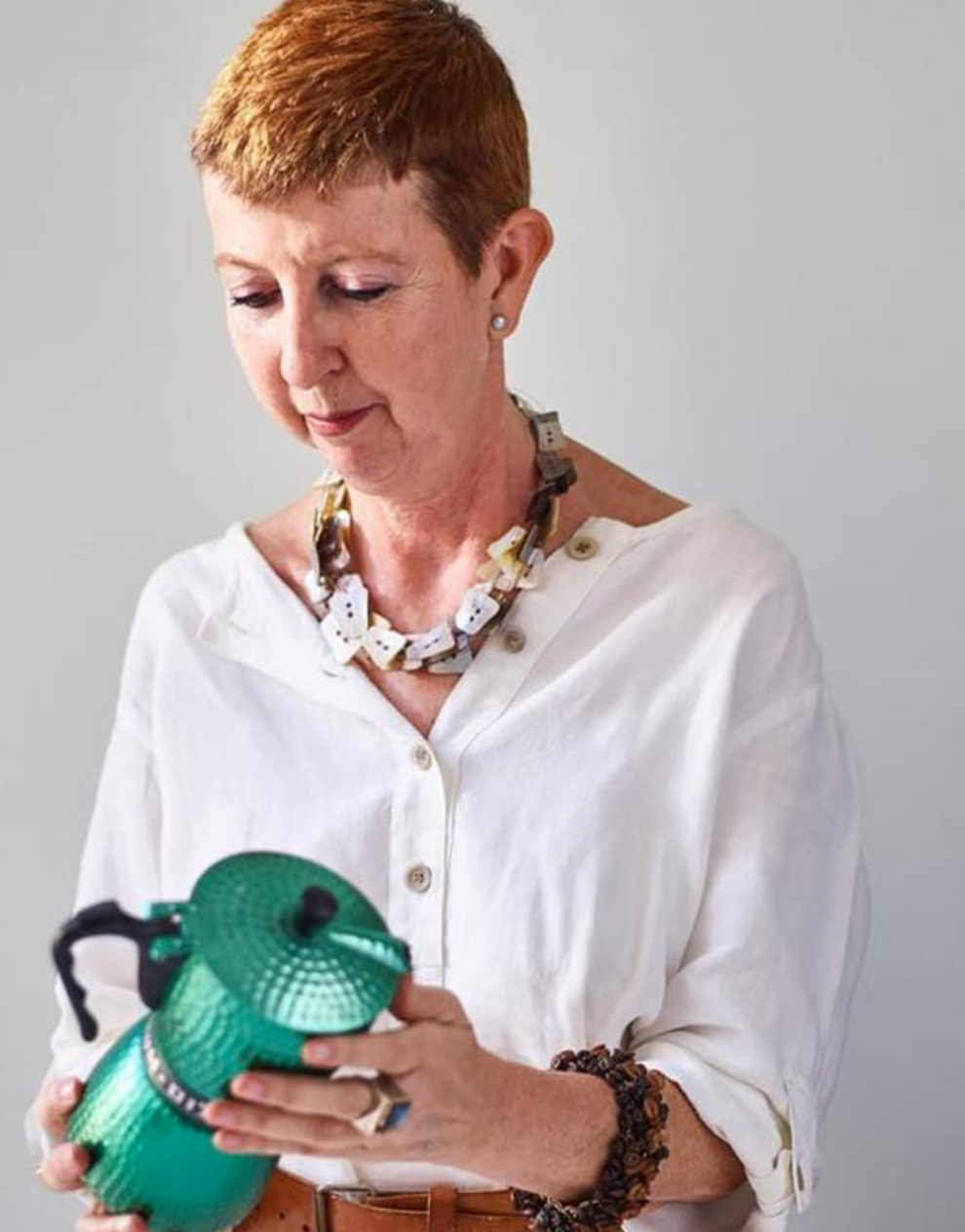 Yahel Sheffer, curator of the exhibition “Coffee: East and West” at the Museum of Islamic Art in Jerusalem. (Courtesy: Yahel Sheffer)

Sheffer’s original plan was to open a cafe in the museum for the duration of the exhibit, but the ongoing pandemic has made that idea too complicated to carry out.

Still, “it’s a very happy show because the cafe is a bridge between people and cultures,” Sheffer said. “Think about it, when we go to a new city, we are looking for a good place to have a coffee. “

And, indeed, as several couples finished their tour of the exhibit, they turned to the guide and asked him for the best coffee in the neighborhood. Fortunately, there are several: