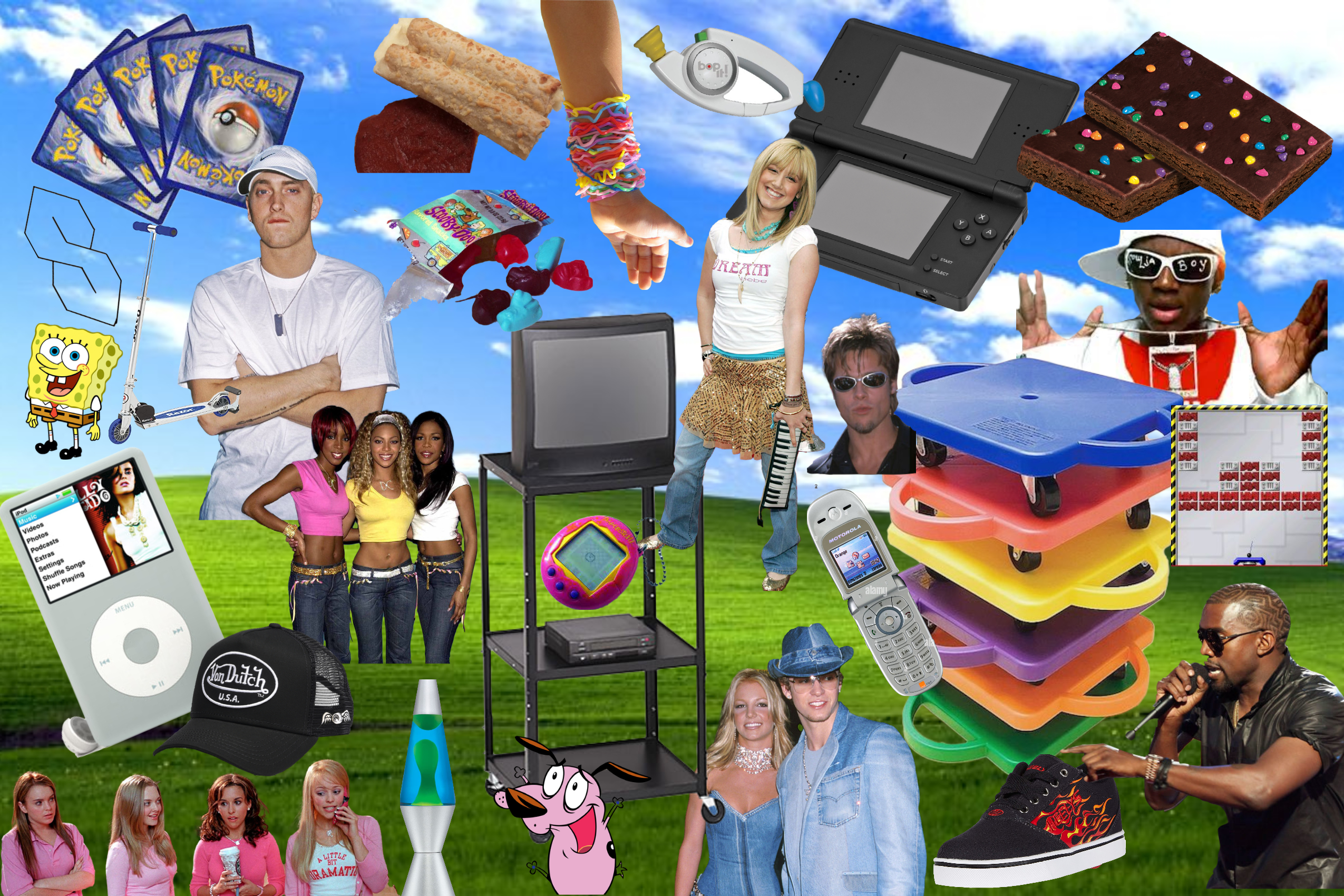 our inevitable return to the 2000s

The year is 2008. The day is Friday. The location is your elementary school. It’s your classmate’s birthday, so your multiplication table lesson ends an hour early for the cupcakes and the party. Your teacher is playing “The Magic School Bus” on the rolling TV stand in your classroom. Your best friend comes after school. Before your mother arrives to pick you up, you trade for a rare Pokemon card. On the way home, Black Eyed Peas’ “Boom Boom Pow” kicks in, followed by Coldplay’s “Viva la Vida”. You spend the afternoon running outside and watching Nickelodeon. You might even get a Cosmic Brownie for a snack!

I have just described to you the feeling of pure happiness. For many my age, nothing can beat the simple good feelings of the 2000s, partly because we were kids with few worries and partly because of the culture of the time. Now, as young adults, there is a growing nostalgia for the era of our youth. Especially in social media spheres, there is a major resurgence of 2000s pop culture. Much to the dismay of some, trends like trucker hats, low-rise jeans, and even wired headphones are making a comeback.

As trend cycles are known to repeat themselves every 20 years, the 2000s revival is timely. A distinct 2000s influence is creeping into every facet of popular culture. Take the music, for example: pop-punk dominates the pop music scene, and rap albums take on the style of 2000s mixtapes. Public figures from the era also reappear: the Jonas Brothers reunited, Nas wins Grammys and Paris Hilton, as I recently learned, is now a chef.

In keeping with the 20-year rule, much of early 2000s pop culture is itself borrowed from the 1970s. Bell bottoms turned into bootcuts. Disco & funk transformed into electronic & hip-hop. “That 70’s Show,” a tribute to the titular decade, ran from 1998 to 2006. The cyclical nature of trends is undeniable. Now we see a unique style of dress and music from the 2020s, 2000s, 70s: Take “Levitating,” a disco-inspired rap-inspired chart hit, or Silk Sonic, a duet that looks and sounds like it all. the right to Train of souls. Given our current socio-political climate, it is not surprising, and I would even say necessary, that we are reliving the 2000s.

The recurrences in pop culture of these eras are not without reason. The socio-political context of these times (from an American perspective) is strikingly similar. In the 2020s, we are emerging from the COVID-19 pandemic and have seen humanitarian crises unfold in Ukraine, Palestine and on our own southern border (to name a few). In the 2000s, the country faced the aftermath of 9/11 and the “war on terror”. The 1970s were no less turbulent, amid the civil rights movement and the Vietnam War. All three eras are also characterized by a technological boom with the spread of computers in the 70s, the Internet and mobile phones in the 2000s, and the ever-increasing dependence on our devices in the 2020s. Finally, and may -to be the strangest, we came out of notorious presidential regimes in each era: Trump (2017-2021), Clinton (1993-2001) and Nixon (1969-1974). To boot, all three presidents were impeached, or resigned before he could be, in the latter’s case.

To distract themselves from social, political and economic unrest, people have sought refuge in popular culture. In the 1970s, “after Watergate, a lot of people retired from politics altogether. They leaned into pop culture instead — easy to do in such a trend- and fashion-heavy decade. In the 2000s, obsession with celebrity culture — think Britney Spears — served as a form of escapism. In the 2020s, TikTok’s whipped coffee and upbeat dances gave users joy, hope, and distraction during quarantine. I think many of us, myself included, can quickly see pop culture as superficial, consumerist, or melodramatic. It is evident, however, that it has a powerful ability to balance the sometimes unbearable weight of politics, pandemics and problems in our lives.

As the babies of the 2000s reach adulthood, the generation shifts from trend-followers to setters. Our upbringing informs our preferences; things that seem familiar to us – the fashions of our youth – are coming back into style. At a time when much of our coming of age has been overshadowed by the COVID-19 pandemic, there is a collective longing for a simpler, more stable time. Thanks to the unprecedented nature of the past few years, an overwhelming nostalgia has hit Gen Z, and it’s materialized in the sounds of music, the look of clothes, the feelings of our youth.

The recent re-release of a video game from the 2000s illustrates why the revival of the era is timely and necessary. Animal Crossing was a pandemic phenomenon, as detailed in the Guardian article “It unites people: Why 11 million people are playing Animal Crossing: New Horizons… Nintendo’s record breaking new game has been embraced by an isolated world” . There’s a pure-hearted feeling about Animal Crossing that has brought people together during the pandemic. It is the same purity of heart that Gen Zers feel to characterize our childhood.

The stickiness and goofiness of 2000s-inspired fashions is just what we need right now; a reminder that lightness exists, despite the darkness that often surrounds us. Now, I am not calling on us to be overly hedonistic or to forget about the injustice and adversities that surround us. I say, though, if you need to wear a denim-on-denim outfit to feel joy, so be it.

MiC columnist Jameel Baksh can be reached at [email protected]