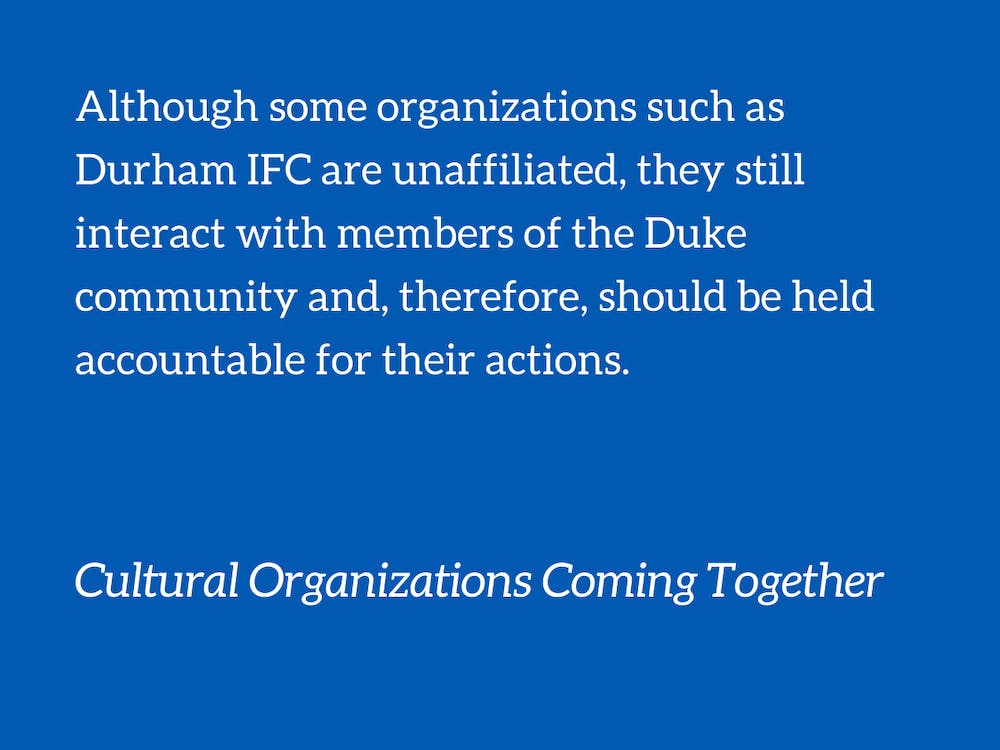 In 2003, Sigma Chi organized a “Viva Mexico” party. It was a party where fraternity members dressed up as border patrol agents, handed out green cards, and danced in construction vests. Speaker Keohane quickly responded, saying “officials will take a closer look at party registrations now.” Almost 20 years later, the university continues to be plagued by racist incidents.

On May 2, members of Alpha Delta Phi (ADPhi) wrote a message promoting their party stating, “Need help crossing the border? Luckily for you, ADPhi has a few too many Latinos who are extremely good at evading law enforcement. Join us in [location]. Don’t get kicked out. It is both racist and classist to undermine and stereotype the experiences of Latinx students and their families. This statement criminalizes and dehumanizes Latino immigrants while ignoring the hardships they face. We unequivocally condemn these racist statements, and the many others that have occurred historically and continuously. These incidents speak to a number of issues that Duke University needs to address.

Even outside of Greek life, people continue to be affected by racist incidents at systemic and direct levels. Last year, the Cardea Fellows program was attacked with a racist impression that attempted to justify the murder of George Floyd. The students said the response from Duke administrators characterized the incident as opinion rather than an attack on their identity. Likewise, in this case, there is rhetoric among members of the Duke community that the ADPhi post was “just a joke” or that “there is a different time or place to discuss matters racial”. These are classic examples of tone policing, prioritizing the comfort of the participants in the attack over tackling the racist issue. When we start to downplay the hardships of marginalized identities, not just Latinx — anyone who comes from historically underrepresented backgrounds — we trivialize the experiences of hundreds of thousands of people. Trivialization is always the first step in diminishing someone’s fight against injustice. Without accountability, this leads members of the university to continue to promote these behaviors and even to intensify them.

The disaffiliation of Greek life from Duke University inflamed this behavior. When Duke allowed Greek life off campus, Durham residents and those from marginalized backgrounds faced the consequences. Many members of the Durham community have come forward against ADPhi and their behavior. We stand with the residents of Durham and urge the university to take all possible action. That’s not to say fraternities should be on campus with increased regulation, but all around Duke there seems to be no accountability in any form on the part of the university. Many fraternities, sororities and Selective Life Groups (SLGs) set up black squares and posted messages supporting Black Lives Matter (BLM) after the summer of 2020. However, little or no meaningful action was taken during the summer or the period that followed directly impacted the Duke or Durham community. Also, the disaffiliation of executive members from Durham IFC justified this decision by stating that it would reduce incidents of racial bias, but this has still not been the case. Statements have no substance if they are not accompanied by transparent actions to reduce rates of prejudice and racial prejudice. There is still no online mechanism for reporting racially motivated attacks that is widely available or accessible to the general public. Other than a hotline promoted during a spike in COVID cases or via Durham IFC messenger on instagram or Facebook messenger, there appears to be no way to easily contact them.

Selective social groups, unaffiliated or unaffiliated, need more transparency in their systems to combat racism, sexism, homophobia, xenophobia, ableism and sexual assault. Money and claims don’t mean much when the behavior you promote internally through membership thwarts the actions you try to promote externally as an organization. Although some organizations such as Durham IFC are unaffiliated, they still interact with members of the Duke community and therefore should be held accountable for their actions. As an organization made up entirely of Duke students, these fraternities are still under the jurisdiction of Duke University and must still adhere to the Duke Community Standard, which includes the Duke and Durham community. As such, at Durham IFC, we demand:

Students for Justice in Palestine

We are waiting for your answer.

If your organization would like to add to these statements or if you have any comments, please add them here. To sign the petition in support of Durham residents and urge Durham City Council to remove fraternity members and their fraternity houses from residential areas, sign here. For a current, daily updated list of signatory organizations to the statement, click here.

Correction: An earlier version of this column incorrectly stated that the ADPhi message was sent on May 3. It has been updated to reflect that it was sent on May 2. The Chronicle regrets the error.

Get The Chronicle straight to your inbox