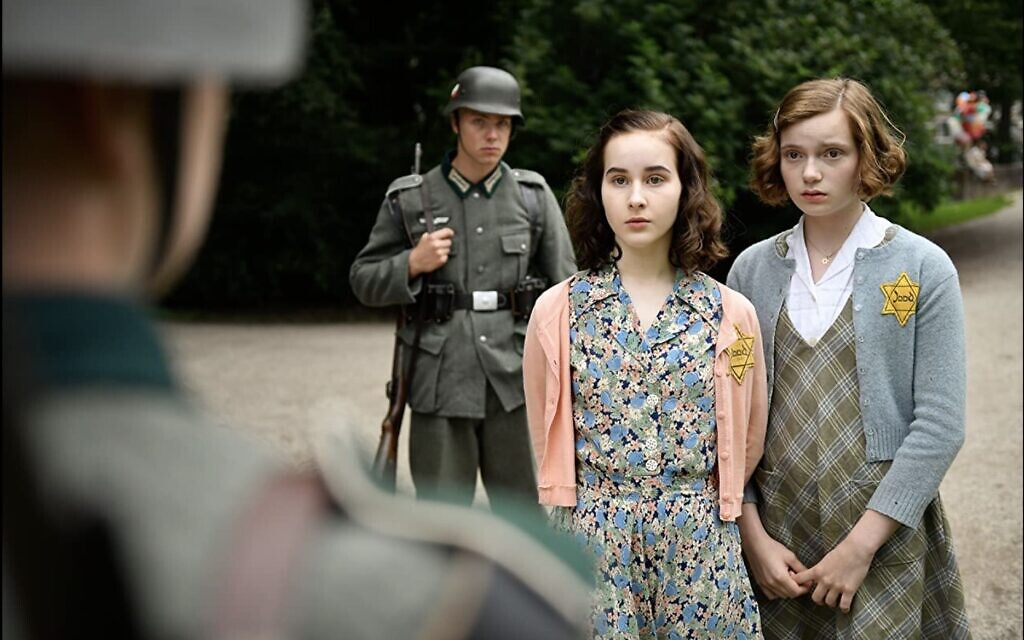 These few degrees of separation from Anne Frank have made headlines in recent weeks: Dutch Jewish notary Arnold van den Bergh, who allegedly betrayed the Frank family by reporting their fate to Nazi officials, a potential enemy; and Hannah Goslar – a friend – Holocaust survivor and Frank’s schoolmate in Amsterdam, whose story is recently portrayed in the movie “My Best Friend Anne Frank”, now streaming on Netflix.

“My Best Friend Anne Frank,” directed by Ben Sombogaart, swings between scenes of Hannah (Josephine Arendsen) navigating the early days of the Nazi regime in Amsterdam in tandem with the trials and tribulations of adolescence and surviving the horrors of the Bergen-Belsen concentration camp in 1945, where she took on the role of parents to her younger sister Gabi, when she herself was just a child, aged just 16.

Hannah and Anne (Aiko Beemsterboer), young teenage girls more concerned with courting blond, blue-eyed boys than the ongoing World War II, are given an unwelcome dose of reality as their parents increasingly tell them to keep a profile. down and to avoid picking up the phone or leaving the house – lest someone dangerous spot the bright yellow fabric stars sewn onto their cardigans.

Although they are both young Jewish girls who grew up in the Netherlands, Hannah and Anne couldn’t be more different. Hannah is shy and blushes deeply when teased by classmates who ask her how her mother got pregnant. She wants to become a nurse but is sensitive and naive to how the world works.

Anne wants to get Hannah out of her comfort zone. Growing up with her older sister Margot, Anne is knowledgeable, confident and outgoing. She causes kerfuffles with Hannah, often being the first to tease her about her childhood, but also the first to apologize and the first to ask Hannah for help when she is in a difficult situation.

As soon as their friendship is established, it is taken away from them as the war and the movie escalate. Hannah thinks the Frank family is fleeing to Switzerland for a ski vacation she was not invited to; and Hannah, younger sister Gabi, and father Hans Goslar are captured by the Nazis and sent to Bergen-Belsen, where they are separated.

In the days before the camp is liberated, Hannah’s only mission becomes finding extra food to send to a sick Anne, who is in another part of the camp with harsher living conditions.

The film’s title, while appealing to audiences, is misleading, as the film features modest screening time between Hannah and Anne. Their friendship serves as a plot device to connect Hannah’s experiences before and during the Holocaust, both of which are punctuated by moments of friendship with Anne.

In its effort to portray itself as a film about their relationship, “My Best Friend Anne Frank” instead attempts to weave together the narratives of two complex characters, both of whose stories fall flat.

Important questions about Hannah and her family remain unanswered, especially as her family is offered a way to escape the camp. Due to the family’s possession of Palestinian exchange papers, a detail not explained in the film, they are allowed to be exchanged with a German POW. According to a 1997 Scholastic interview with Goslar, the Goslar family also had passports from Paraguay and their documents allowed them to occupy a part of the camp that was free from the worst horrors of the Holocaust.

Goslar is also originally from Berlin; the family moved to Amsterdam after an unsuccessful attempt to move to England. With little background information about Hannah, the film fails to paint her as a character in her own right, especially independent of Anne, whose story is so well documented.

For a film that woefully neglects plot points, “My Best Friend Anne Frank” pays refreshing attention to detail, bringing to life a Holocaust narrative that has been mirrored in earlier films such as “The Boy in the Striped Pajamas” and “The Devil’s Arithmetic”. .”

The Jewish tradition of mourning of tearing clothes depicted in the film is evocative. Hannah can’t cross the threshold of a room without kissing the mezuzah, even taking a few steps back to make sure she’s performing the mitzvah. In these small moments, the film reminds audiences of the Jewish people’s deep attachment to tradition, even in the face of extreme adversity.

Hannah’s story as portrayed by “My Best Friend Anne Frank” is a true reminder of the humanity of those who endured the Holocaust. In addition to being resilient and heroic, survivors – especially children – are still human: brash, impulsive, and sometimes bewildered.

In its effort to tell the story of two girls over several years, “My Best Friend Anne Frank” scatters a little too much, the important reminder of the Holocaust diluted by the film’s lack of restraint. PJC

Sasha Rogelberg writes for the Jewish Exponent, where it first appeared.