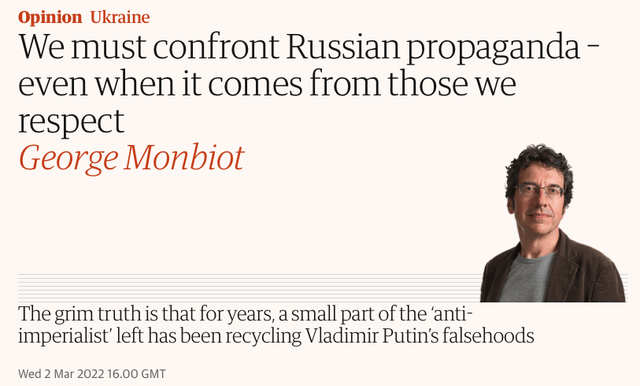 “Monbiot never wrote a column about the worst attack on press freedom in a generation: the political persecution of Julian Assange. Soil erosion, he said, took precedence. Now, it prioritizes a witch hunt against left-wing heretics in Ukraine over the freedom of Assange.This is pure fraud.

What is amazing is that Monbiot accuses people like John Pilger of being Putin apologists not by refuting Pilger’s facts (which are documented) but by claiming that Putin said similar things. As if the truth becomes false as soon as it serves Putin’s interests.

Despite a headline claiming that the “anti-imperialist left” is amplifying Russian propaganda, Monbiot is simply throwing mud. Apparently, he doesn’t need to cite rebuttal evidence. He suggests that all critics of NATO or US foreign policy are heretics by definition.

Additionally, Monbiot rekindles a black propaganda talking point at the CIA. Pilger is discredited not because his facts are wrong – after all, they are well documented, including by senior US officials – but because the wrong people shared them on the net. It’s a puerile argument.

This dirty tactic is popular with the Israel lobby. Write an article exposing horrible facts about Israel and they’ll scour the net until they find a neo-Nazi site that reposts it. Then they don’t need to address the facts. The truth becomes a lie simply because it also serves the neo-Nazis.

There’s a reason Monbiot attacks the last of the old school foreign correspondents – Pilger, the late Robert Fisk and Seymour Hersh. They saw with their own eyes how “our” elites controlled the media to brainwash the public in order to maintain their power. Bravely, they said it directly.

Monbiot, on the other hand, falls far short of his depth on anything he can’t skim through his fingers. Listen to it on the environment. Otherwise, treat everything he has to say with the disdain he deserves.

I challenged Monbiot every time he wrote this kind of poison. He dodges a confrontation with those he insults: Chomsky, Pilger, Fisk (now dead), and others. He knows they would take him to the cleaners.” – Jonathan Cook

AAUP errs in taking sides on definition of anti-Semitism (opinion)