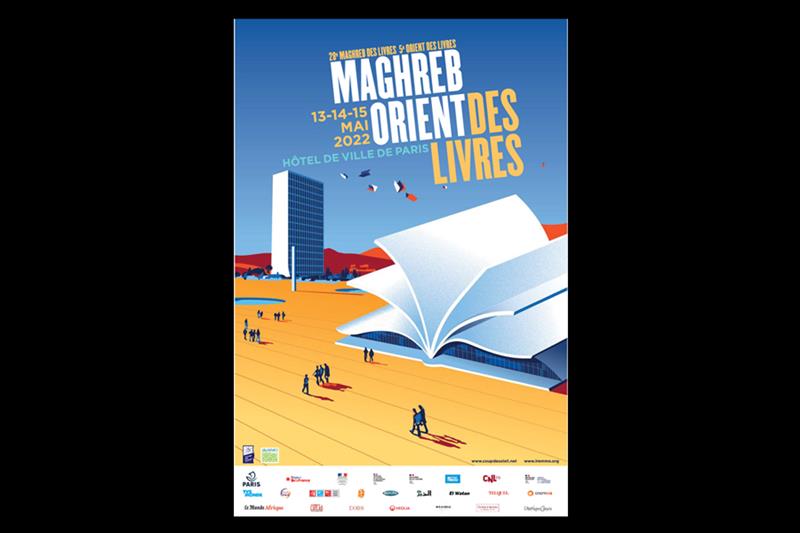 Last year, the Maghreb Book Fair in Paris surprised visitors by having no books, a temporary measure at this annual gathering for anyone interested in French books on the countries of the Arab Maghreb which are Morocco, Tunisia and Algeria made necessary by the Covid-19. 19 pandemic.

Yet at this year’s Fair, held May 13-15 in the usual venue of the Hôtel de Ville in Paris, books were once again in the spotlight, accompanied by a stimulating program of discussions, debates and interviews with French and Franco-Arab authors.

As has been the case in recent years, the Fair has also expanded beyond the Maghreb countries, with organizers from the French NGO Coup de Soleil being joined by IREMMO, the Institute for Research and Mediterranean Middle East studies, and also including books in French to the east of the Arab world. The Fair was therefore not only the 28th edition of the Maghreb of Books, but also the 5th edition of the Orient of Books, a twin event dedicated to the countries of the Machrek.

This year marks the 60th anniversary of the signing of the Evian Accords which ended the Algerian War of Independence in March 1962, with Algeria officially becoming an independent country a few months later. The Accords are marked in France by exhibitions and other events in Paris and elsewhere, and there have been a multitude of new books in French on colonial and postcolonial Algeria, including on the controversial issue of the memory of the war.

The veteran French historian Benjamin Stora, born in Algeria in 1950 and author of numerous well-known works on colonial and postcolonial Algeria as well as on the Algerian war of independence, was present this year at the Maghreb des Livres to talk about his work and a report on Franco-Algerian relations commissioned by the French government that he produced last year (published under the title France-Algeria, les passions sorrows). He was accompanied by many other writers, historians, novelists and memoirs, all of whom had interesting things to say about France and Algeria.

Among the books discussed at the Fair this year was En guerre(s) pour Algérie by the young French historian Raphaelle Branche, a book of interviews produced as part of an oral history project on memories of the war funded by the French National Audiovisual Institute (INA) and the Franco-German channel Arte for a series of television programs. Branche is the author of the esteemed Papa, what did you do in Algeria? (Papa, what did you do in Algeria?), a pioneering oral history in which she interviews the families of some of the one and a half million French soldiers, mostly conscripts, who fought on the French side during the Algerian war.

In the introduction to his new book, Branche writes that some 70 interviews were conducted in France and Algeria as part of the INA-Arte project, with all those who volunteered to be interviewed about their memories of the war being young. , sometimes very young. , during its nearly ten-year tenure.

“The original question was always the same,” she says. “’How was life during the war?’ For those interviewed, the project involved going back more than 60 years, often more than 80, with a focus on what they saw happening. Everyone could say: “I was there. I saw that,” and also to describe what they did and thought at the time.

Branche, like other authors with books on the Maghreb published this year, had gone to the Salon to meet her readers, notably during a panel on the first day of the event on the memory of the war of Algeria which also saw the participation of other authors.

Marie-Claude Akiba Egry spoke about her novel L’Enfant qui s’estaitait about a child caught up in violence, Nadia Henri-Moullai spoke about her Un rêve, deux rives. , a novel about Algerian immigration to France, and Paul Max Morin spoke about his Les Jeunes et la guerre d’Algérie, an investigation into how war is perceived among members of the younger generation.

Other themes honored at the Salon this year stem from current events in the Maghreb and the Middle East and their writing by authors who are mainly French or Franco-Arab. Ghada Karmi, a Palestinian author and sometimes contributor to the Weekly, had come from London to discuss the French translation, carried out by the famous French writer and editor Eric Hazan, of his book Israel-Palestine, the solution: a state (originally published under the title Married to Another Man: Israel’s Dilemma in Palestine).

That’s what she did during a panel with Sylvain Cypel, author of The State of Israel against the Jews and the famous commentator Alain Gresh, author of dozens of books on all aspects of the Middle East. and more recently The Palestinian Revolution and the Jews.

Continuing the Middle East theme, authors Justine Augier, Cécile Boax, Souad Labize and Jean-Pierre Perrin discussed the ongoing conflict in Syria, now pushed from the front pages of many world newspapers by the war in Ukraine. Perrin is the author of the tragically and perhaps too aptly named An Endless War, while Augier recently published By a kind of miracle: the exile of Yassin al-Haj Saleh, an account of his interviews with this Syrian intellectual. distinguished man who now lives in exile in Berlin.

Commuting between Paris and Berlin for much of the year to interview al-Haj Saleh, Augier writes of this period in the introduction to his book that “during all this time the destruction continued in Syria. Fighters against the al-Assad regime, along with all those civilians who were unable or unwilling to flee the country, had been pushed into the Idlib region, an area containing opposition-held enclaves. As I write this, more than three of the millions of people are living under bombs raining down on hospitals, schools and commercial areas, on anything that could make life more bearable.

Destruction of another order, economic this time, was also the theme of another panel at this year’s Fair on the current crisis in Lebanon. Authors Sophie Brones and Hyam Yared discussed Beirut in Ruins, a description of some of the Lebanese capital’s crumbling buildings, destroyed or partially destroyed during the civil war, and Implosions, a novel featuring Beirut Port Explosions in August 2020, with host Agnès Levallois.

Dialogue: As has become a tradition in the Maghreb des Livres, the discussions did not focus solely on new developments in French in the Arab world. Many guest writers had written books on relations between France and Arab countries, particularly the Maghreb, and these also gave rise to enriching discussions.

This year is the 50th anniversary of the founding of Sindbad, originally an independent publisher, but later acquired by Arles’ largest company Actes sud, which, whether under the Sindbad imprint or that of its more recent owner , has become the most important publisher of modern Arabic literature in translation in France. A panel on the second day of the Fair brought together a number of contributors who shared their memories.

Farouk Mardam-Bey, Editor-in-Chief of Actes Sud de la Fiction Traductione d’Arabe as well as the publisher’s largest collection of non-fiction and other “Arab Worlds”, spoke about the story of imprint as well as the role it played in making Arabic literature better known in France. Before Sindbad’s appearance in the early 1970s, he said, very few works of modern Arabic literature had been translated into French – he mentioned Egyptian writer Taha Hussein’s autobiography Les Jours et le Tawfiq al-Hakim’s novel-memoir Diary of a Country Prosecutor as exceptions – and those that had been presented primarily as works of ethnography.

Sindbad, and particularly its expansion at the hands of Actes Sud, had changed all that, he said, pointing to the appearance of translations of Egyptian Nobel Prize winner Naguib Mahfouz’s novels into French in the 1970s and later from a series of novels by Palestinians, Iraqis, and Lebanese authors. According to other members of the panel, it was the existence of the Actes sud list that first prompted them to become interested in translation.

Translator Khaled Osman, who grew up in France but of Egyptian descent, described sending his first translation, of Mahfouz’s novel The Thief and the Dogs, to Sindbad in the 1990s, for example. The Yemeni writer Habib Abdulrab Sarori, whose novel The Hoopoe Report, translated from Arabic and to be published in October, describes his own introduction to Arabic literature, whether classical or modern, as the fruit of translations published by Actes sud. Books had been hard to come by in his native Yemen, he said, and when he came to France he found reading the translations a good way to learn the language and learn from it. more on Arabic literature.

All the panelists described their pleasure in reading the translations of Actes sud, the publisher continuing the tradition of fine printing and quality binding initiated by Sindbad. France must be the only country in the world where modern Arabic literature appears in luxury editions, commented Mardam-Bey, and it is interesting to compare this situation with parallels in the United Kingdom, where the first translations were published. in inexpensive editions by an educational publisher, Heinemann, and in the United States, where they are published by university presses.

Could it be concluded that modern Arabic literature in translation has a small but affluent audience in France, was originally available mainly for use in schools in the UK, and is produced mainly or entirely for university study in the United States? -United ? This perhaps says more about these respective countries and their publishing industries than it does about modern Arabic literature.

Finally, this year’s Maghreb des Livres presented many of the strengths and weaknesses of previous editions. On the one hand, it was an opportunity, eagerly seized by the attentive audience of the Salon, to take stock of this year’s crop of French-language works on the Maghreb countries and the Arab world in the broad sense. Most of them were available for purchase and many of their authors visited the Fair either to speak at a panel, answer interview questions or sign copies.

In addition to the titles cited above, Here we drowned the Algerians by Fabrice Riceputi, the story of the assassination by the French police of 200 to 300 Algerians in Paris in 1961, Algeria 1962, a popular history by Malika Rahal, a reconstruction of life in Algeria the year of independence, and Farid Alilat’s award-winning biography of former Algerian President Abdel-Aziz Bouteflika, were all honored.

However, there was little or no representation from the region at the Fair, whether from the Maghreb or the Mashreq countries. Speakers on a panel on “dialogue through books across the Mediterranean” suggested some of the possible reasons for this, including the small number of publishers publishing in French even in Maghreb countries where French remains a important literary language, the small size and limited means of those that exist, and the problems of distribution and translation.

This year’s Maghreb visitors to Books will come away with a good idea of ​​what French readers are reading about Maghreb countries. They will have much less idea, or no idea at all, of what Maghreb readers reading in French (or Arabic) are reading.

*A version of this article appeared in the July 28, 2022 edition of Al-Ahram Weekly.