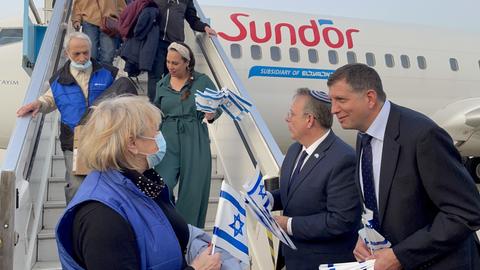 The Middle Eastern country’s concern about the European conflict may go beyond humanitarian reasons.

Israel has made numerous statements in recent weeks welcoming Ukrainian Jews”residenceto Israel, if they seek to emigrate. Unlike the Ukrainians with Temporary protected status (TPS) in the EU – which, as its name suggests, offers temporary protection – all Jews can claim citizenship without questions under the Law of Return, even if they have never visited .

“This is an important moment, a moment for which we were destined and for which the State of Israel was created,” Israeli Prime Minister Naftali Bennett said two weeks after the start of the conflict in Ukraine. Tel Aviv said it expects up to 100,000 Jews to arrive from Ukraine — and even Russia — in the coming months.

“The great mission is to open doors, to open hearts, to welcome our brothers and sisters fleeing a difficult war. Be sure that [they will have a reception that] will even alleviate a bit of the trauma they are going through, an inconceivable trauma – uprooting themselves in a matter of hours or days and moving to a distant and different country,” Bennett continued.

Despite talk of humanitarianism amid the trauma, Israel announced that only 5,000 new non-Jewish Ukrainians could come to Israel as refugees, while 20,000 would already be permit remain during the conflict.

This positioning exposes Israel’s discriminatory motives and alludes to a policy of opening borders to a population – not necessarily because they are in need – but rather as a means of modifying the national framework. demographic.

This is a perfect opportunity for Tel Aviv to use Ukrainian refugees as a means to gain demographic dividends, knowing that global sympathy for Ukrainians could overshadow such a politically motivated resettlement plan.

Unknowingly or not, President Zelenskyy and other members of his team have brought water to Israel by repeatedly reiterating that Ukraine is to like Israel, defending itself against “total destruction”. It is unclear what the purpose of this rhetoric is – whether to win the sympathy of the Western public or to attempt to distort all the violations of international law and human rights that Israel commits on a daily basis.

Achievement of the resettlement objective

The UN recently announced that about 3.7 million Ukrainians have fled the violence in their country since it began on February 24, adding that in the first ten days of the conflict, some two million people have been displaced.

The majority of these people have sought refuge, mainly in countries neighboring the European Union. In fact, Ukrainians and residents of Ukraine are eligible for TPS and are therefore granted a renewable residency period of one to three years and access to health care, education and housing.

The European Commission has even allocated 500 million euros — a quarter of its total humanitarian budget — to the Ukrainian crisis, so that support is both available and easily accessible.

Since the beginning of the crisis, the media like certain politicians have continued to vomit racist rhetoric against refugees from diverse backgrounds, while the rhetoric about Ukrainians has been consistent and unqualified.

To underscore both the conscious construction and dedication to this project, two key observations can be made. First, the announcement of the World Zionist Organization dedicating 1,000 new units to Ukrainian Jews, who have become Israelis. These units are located in the occupied Golan Heights as well as in the occupied Naqab region. The Golan Heights is still disputed by Syria as sovereign Syrian territory. This statement has been validated by many international organizations including the United Nations.

Second, Israel has established, through the Jewish Agency for Israel, an organization that supports and funds Jewish immigration and settlement in Israel and occupied Palestine, several Ukrainian border stations for Ukrainian Jews, and provided direct flights to Ben Gurion Airport in Tel Aviv. In a single week, the agency raised $15 million.

To elaborate, Ukrainian Jews were essentially called to return “home”. This assertion in itself is contradictory because Ukrainians have faced violence in their country of origin and are waiting for this to be resolved before they can return. Israel, unlike the EU, however, does not see it that way. This injustice is not only observed by comparing the treatment of said refugees with that of native Palestinians, but also by considering migration and the mistreatment of Ethiopian Jews.

This plan, while ostensibly created to support those facing a humanitarian crisis, appears to be just another method to “increase” the number of Jews in Israel. Israelis would do well to remember that these are people fleeing a conflict zone and may not be as eager to erase their nationality and culture to claim demographic dominance in a country as they probably have never visited before.

Disclaimer: The views expressed by the authors do not necessarily reflect the opinions, views and editorial policies of TRT World.

Archbishop of America: We have a culture that is the foundation of all the great aspirations of Western civilization