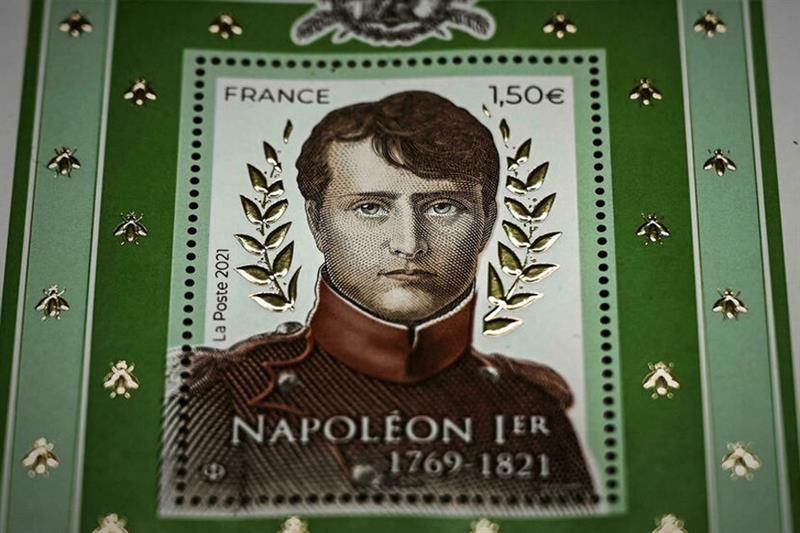 “The news came that the French had reached Damanhour and Rosetta, causing their inhabitants to flee,” wrote the early 19th century Egyptian historian Abdel-Rahman al-Jabarti in his account of the invasion and the French occupation of Egypt from 1798 to 1801. “They printed a great proclamation, calling on the people to obey them”, he added, reproducing the Arabic text.

“In the name of the French Republic, founded on liberty and equality, General Bonaparte, Commander-in-Chief of the French armies, informs all the Egyptian people that for a long time the Mamluks who dominated Egypt have treated the French Community with baseness and contempt… The hour of retribution has now come.

“These Mamluks, imported from the mountains of Circassia and Georgia, have acted corruptly for centuries in the most beautiful land to be found on the face of the globe. However, the Lord of the Universe, the Almighty, has decreed the end of their power.

The French general, later emperor, Napoleon Bonaparte’s Egyptian campaign, later extended to Palestine, was the only one he led outside Europe. Arrived off Alexandria with a force of 40,000 soldiers in July 1798, he returned to France a year later, after having abandoned his troops to be kidnapped by English and Ottoman forces in Cairo. He was then declared first consul in a coup d’état in France in 1799, then French emperor in 1804 in a ceremony that did much to disillusion any persistent admirers he might have had abroad.

The story of the German composer Ludwig van Beethoven crossing out the dedication to Napoleon on his famous heroic symphony is just the best-known example of a more widespread disgust at Napoleon’s apparent betrayal of the ideals of the French Revolution.

But Napoleon was already a problematic figure even before his coronation in Paris, as accounts of his Egyptian and other expeditions reveal. Anyone who undertakes to commemorate him today, 200 years after his death in 1821, will need to present a nuanced portrait, perhaps establishing Napoleon’s reputation as a proselyte of the ideals of the French Revolution, especially in what at the time was still half feudal Europe, against its role as gravedigger, ultimately leading France to military disaster and the restoration of a reactionary regime.

Whatever his faults, Napoleon certainly turned things upside down. As al-Jabarti says of the Egyptian campaign, Napoleon’s brief eruption into Egyptian history ended the country’s anachronistic Mamluk regime and suggested new ways of organizing the state and society, as well as education and scientific research. Later historians largely agreed that the campaign dragged Egypt into the mainstream of 19th-century history and ushered in the reformist regime of the country’s first modern ruler, the originally Ottoman soldier Muhammad Ali.

Something similar can be said of Napoleon’s impact on Italy and Germany, his campaigns both ridding of many semi-feudal excesses and rationalizing political power. Their modern history begins more or less with the campaigns of Napoleon, although the full impact of these was not felt until later. The same goes for Napoleon’s campaigns in Spain, although the latter proved more difficult to resolve. Its invasion of Russia in 1812 sowed the seeds of challenges to absolutist rule, even though it ended in French military disaster.

The balance sheet is therefore complex, debits and credits having to be carefully weighed. While for some Napoleon was a heroic figure, especially because of his campaigns against the Europe of the Ancien Régime, for others, he was a tyrant who largely contributed to establishing a prototype for military and police regimes. subsequent.

The flagship event of the bicentenary year in France is an exhibition at the Parc des Expositions de la Villette in Paris, which, postponed due to the Covid-19 pandemic, finally opened its doors to the public at the end of May. There are also smaller exhibits on the last hours of Napoleon’s exile on the Atlantic island of Saint Helena and on Napoleon in contemporary art at the town’s Musee des Invalides, which also houses his tomb.

The exhibition begins with a film which places Napoleon in the context of his time, mainly the French revolutionary years from 1789 to 1794 and the need for the new republican regime to defend itself against internal and external enemies. Napoleon, he explains, was both a product of the new system following the collapse of aristocratic rule in France and a great beneficiary of it.

First, there is its blunt side with internal opponents of the regime, rather obscured in the exhibition, which does not dwell on Napoleon’s violent methods. Then there were his campaigns in Italy as part of the First Coalition War, at the end of which Napoleon had established himself as France’s most famous general. It was at this time that the ruling Directory, the ad hoc committee that then governed France, decided to send Napoleon to conquer Egypt.

The exhibition is chronological, following Napoleon’s career, from the young military aspirant of the 1780s to the broken man who lived his last years in Saint Helena after the Battle of Waterloo in 1815.

There are many highlights, including the coronation of Napoleon as Emperor of the French and the start of the imperial system, illustrated by a panoramic analysis of the famous painting by French painter Jacques-Louis David. A space is dedicated to Napoleon’s most famous battles and military campaigns, illustrated by a massive projection of a sequence from the 1994 film Colonel Chabert, adaptation of Balzac’s novel, showing the French cavalry charge at the Battle of Eynau , part of the Fourth Coalition War.

The exhibition also touches on various themes, including the workings of the imperial system, Napoleon’s legal, educational and other reforms, his attitude towards women, and how Napoleon’s campaigns, while centered on Europe, had some impact. important ramifications around the world. It shows how the Napoleonic wars, fueled by ideology and nascent nationalism, became the kind of global conflict that was not known otherwise until a century later.

Britain was Napoleon’s most important enemy throughout, ultimately securing his downfall in the battles of the Sixth Coalition War and being involved in every hostile group of European powers, either directly or by funding them in behind the scenes. British power depended on interests abroad, and Napoleon, by training a land commander, was therefore forced to think strategically about how to defeat Britain at sea and outside Europe, especially in Egypt.

The Egyptian campaign, beginning with the invasion in July 1798 and ending in defeat and withdrawal in September 1801, is significant in many ways, only a few of which are discussed in the exhibit. It was the extension of a conflict carried out in Europe to North Africa and Asia, Napoleon, or his masters of the Directory, being as aware as the ancestors of the Old French Regime of the sources of power British. Subduing Egypt, then part of the former Ottoman Empire, could be a way to expand French power across the Mediterranean and strike Britain in India.

But it was also more than that, since Napoleon took with him 167 French scientists who produced what is probably the first major European study of a non-European company, carried out on a large scale and eventually published as the Description of the Egypt. This publication, which was not completed until after the end of the Napoleonic regime, came to 26 volumes of text in its second edition covering all aspects of Egypt, from its antiquities to its natural history to the organization of the modern state. There were 11 other volumes of plates.

The exhibit only offers a glance at this or at the details of Napoleon’s campaign in Egypt, although it does include artefacts reminiscent of the time, including Mamluk weapons of the type used in of the Battle of the Pyramids in July 1798, the decisive encounter in the French conquest of Egypt, among which the sword of the Mamluk leader Murad Bey. There are portraits of members of the divan, or board of directors, set up by Napoleon in Cairo to rule Egypt in cooperation with the French occupiers of the country. It is fascinating to see the faces of these men, whose names are known to us from al-Jabarti’s account of the divan’s actions under Napoleon’s leadership.

Some aspects of the presentation can make visitors short. It would probably have been news to Murad Bey that he was an “ally of the English” in his fight against the French invaders of Egypt, even if it was the British power in collaboration with the Ottomans that ultimately expelled the French. A British naval force commanded by Horatio Nelson destroyed the French fleet off Alexandria during the Battle of Abu Qir in August 1798, trapping French forces in Egypt and cutting them off from their country’s support.

The rebellion which began in October 1798 and during which the population of Cairo rose up against the French occupiers has no place in the exhibition, although it involved the French bombardment of the city and the death of about 2,500 people. According to al-Jabarti, the events led to a significant hardening of French mentalities as well as changes in the functioning of the couch. However, the scientists who had accompanied Napoleon to Egypt also established a research institute, the Institute of Egypt, in a former Mamluk palace in Ezbekiyya, and he has admiring things to say about their library and their scientific experiments.

The reasons given in the exhibit for Napoleon’s campaign in Palestine, in which French forces crossed north Sinai to engage Ottoman forces in Jaffa and then besiege Acre, do not appear to be entirely correct. Napoleon’s intention was to bring his army back across Anatolia to Europe, he says, but even he, constitutionally addicted to daydreaming, must have seen that that wouldn’t work. The intention was probably more to prevent an impending Ottoman invasion of Egypt.

The Palestine campaign was marked by atrocities on the French side, not mentioned in the exhibit, as well as Napoleon’s failure to defeat Ottoman Governor Ahmed Jazzar Pasha in Acre and the death of hundreds of French soldiers from the plague. . It was a disheveled French column that returned to Cairo on June 14, 1799, and subsequent attempts to conquer Palestine and Syria from Egypt had to await Ibrahim Pasha’s campaigns some 30 years later.

Overall, the exhibition, well designed and elegantly conceptualized, is an infallibly stimulating spectacle. He has something like the scale appropriate for a commemoration of Napoleon, or rather he is able to move convincingly between the individual scale, focusing on Napoleon the man and some of those around him, especially the soldiers who followed him into the field, and the gigantic events in which he and they were involved.