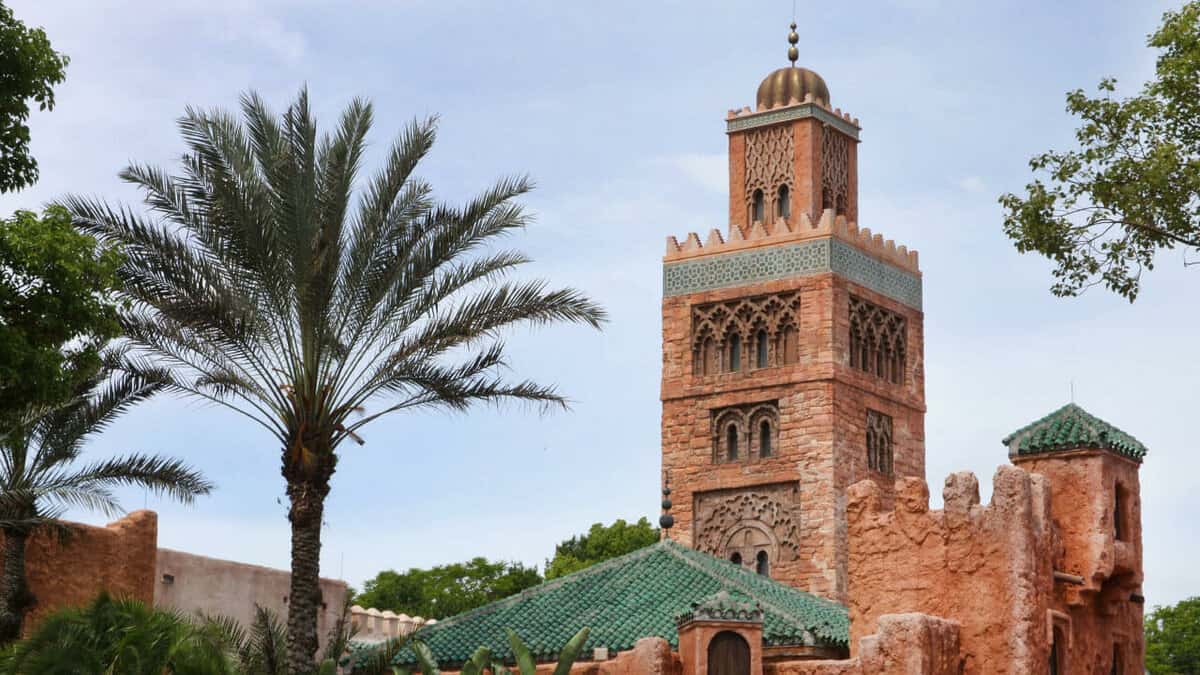 The Morocco Pavilion in EPCOT’s World Showcase opened on September 7, 1984. It was the first expansion that Walt Disney World added to the original World Showcase!

The Morocco Pavilion is unique in that Walt Disney World Resort Imagineers worked closely with the Government of Morocco to design the city-inspired pavilion. It contains a magnificent and imposing minaret, a type of tower usually built near mosques that recall the presence of Islam in Moroccan cities.

King Hassan II, who was King of Morocco from 1961 to 1999, sent a group of carefully selected Moroccan artisans to create traditional mosaics that respect Islamic beliefs. (That’s why the murals don’t depict any humans!) The food served at the Morocco Pavilion is also halal, meaning it’s permitted under Islamic law.

The Moroccan government sponsored EPCOT’s Morocco Pavilion until 2020, when the Moroccan Embassy ended its partnership and transferred all pavilion operations to Walt Disney World Resort.

Due to Morocco’s beloved portrayal, some Walt Disney World fans have come together to demand more Middle Eastern culture at Disney parks.

Like Morocco pavilion, Aladdin area in MK and much more. This only came to mind when I was watching Harmonious on D+ and how Middle Eastern musicians stood out the most

u/Euchre agreed, writing that they found EPCOT’s Morocco pavilion to be the most immersive part of the Disney parks next to Star Wars: At the edge of the galaxy:

It kind of suggests that’s why the pavilion is best isolated from the outside world when you get to the back. When the shops were working (and hopefully will be again) it really was like being in a bazaar down a side alley. The only other place I’ve felt nearly as immersed is Galaxy’s Edge.

Most Walt Disney World fans have argued that Disney does not accurately represent Indian culture in the parks, but they hope for better Indian representation in the future. From u/Psyco19:

I would say it doesn’t suit Indian culture so well. There is no real Indian culture anywhere. Everest is Nepali, Morocco is Muslim, and Harmonious had a good part, but the entertainment was the worst.

u/VincentStonecliff referenced years-old rumors of a The jungle Book (1967) climbs into an India pavilion at EPCOT, writing:

Part of me wants an IP-free ride, but I get the lure of movies to engage kids in the global showcase.

I think they should replace the current “outpost” area. I know it’s supposed to become a bigger African area… but the animal kingdom has arrived. I think India or Spain would be great to have there.

The demand for more Middle Eastern and Indian culture at Walt Disney World Resort exists alongside a massive demand for a Greek pavilion, which has even been mentioned in this discussion.

In the 1980s, Disney announced it would add Israel to EPCOT, but eventually backtracked after protests amid the Israel-Palestine conflict.

Would you like to see more Middle Eastern and Indian culture at Walt Disney World? What pavilion would you add to EPCOT’s global showcase?