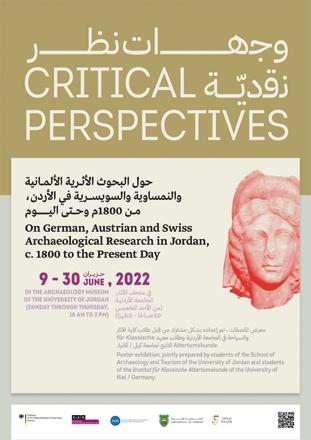 Ammon News – A poster exhibition on archaeological research opened Thursday at the University of Jordan (UJ) as part of an exchange program between Jordanian and German academic institutions that started a few years ago, according to organizers.

The exhibition, titled “Critical Perspectives on German, Austrian and Swiss Archaeological Research in Jordan, from circa 1800 to the Present”, will last until June 30 and was curated by students from the Institute of Classical Studies from the University of Kiel in Germany. and the School of Archeology and Tourism at the University of Jordan, said German professor and co-organizer of the event Oliver Pilz.

“Each poster focuses not only on individual researchers such as Ulrich Jasper Seetzen (1767-1811), Johann Ludwig Burchardt (1784-1817) or Alois Musil (1868-1944), but also on institutions involved in archaeological research in Jordan, including the German Society for the Exploration of Palestine and the German Protestant Institute of Archeology in Amman,” Pilz said.

Pilz added that one of the seven posters is dedicated to Professor Thomas Weber-Karyotakis, “whose life and work were and are inextricably linked with the Levant in general and Jordan in particular”.

For Pilz, it was particularly important that German students of classical studies had the opportunity to see archaeological sites in Jordan.