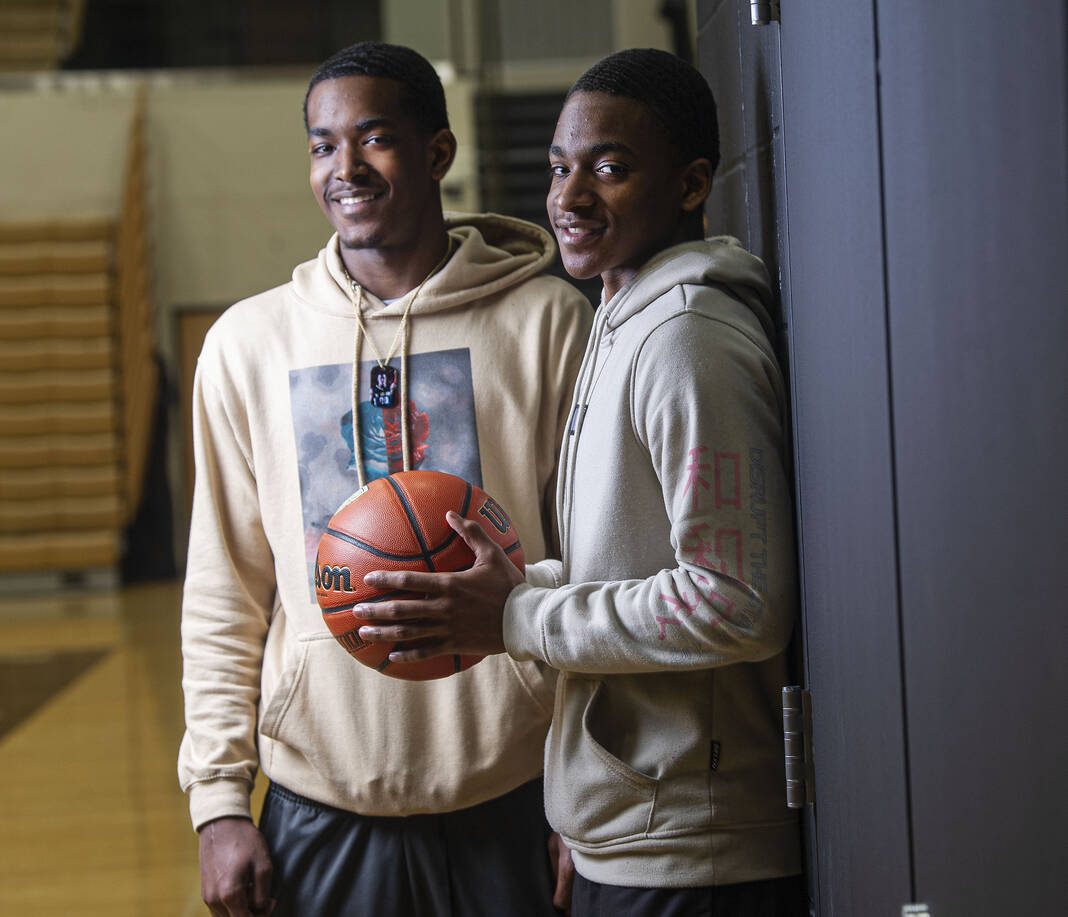 FORTVILLE – Armon Jarrard knows better. At the same time, he’s also not one to back down.

It’s been several years since Mt. Vernon’s senior twins, Amhad and Armon Jarrard, faced off on the basketball court. Their father, Antwain, put an end to this ancient tradition some time ago, and for good reason.

Neither Jarrard ever wants to lose.

“We don’t play anymore because we always end up arguing,” Amhad said. “We haven’t played for a long time.”

On the court, Amhad, who is 15 minutes older, has never failed to get under his brother’s skin with a quick hoop practice, fingertip steal or vice versa with Armon burying a jumper with Amhad’s hand in his face or attacking the rim, himself.

“He hasn’t dunked me yet,” Armon pointed out.

Armon has seen his brother punish iron many times, whether in an AAU game, in-season at Mt. Vernon, or in a random pickup game.

Amhad knows that Armon is not one to challenge from any distance, let alone in the lane.

Quiet by nature, the Jarrards talk loudly when playing basketball, and their abilities have not gone unnoticed this offseason.

Every day, a new honor or a new invitation to a presentation seems to arrive.

First, IBCA All-State selections with Armon earning a spot on the prestigious Senior Supreme 15 team, while Amhad was named to the Senior Large School All-State team.

Both were also invited to compete in the IHSAA/IBCA Workout Top 100, Hoosier Reunion Classic at Historic Hoosier Gym in Knightstown later this month and earned automatic placements on the All-Hoosier Heritage Conference team for a second. consecutive year.

“Armon got AP all state, and Amhad didn’t. One is an all-star and the other was not. One was Supreme 15 and the other was not. I think it shows when you really look at their stats, they’re literally tenths of a point from each other per game,” Mt. Vernon head coach Ben Rhoades said. “They are not the same. They are different, and they would come at different times. If one had a tough game, the other was willing and understood that he had to take over.

If anything has been proven over the past four years, it’s the Jarrards who work better together than against each other, and rightfully so, they share the honor of being selected as basketball athletes from the 2021-22 All-Hancock County Co-Boys year.

“It’s the reward they get for their hard work and their focus on what they have in hand. They were both focused on going to college and playing basketball. They both wanted to win and have scholarships for IUPUI next year. I’m very happy for them and their family that they’re getting what I think they really wanted out of it,” Rhoades said.

“They had a good experience at Mt. Vernon, and I know we’re going to miss them, but they have brighter things to come.”

Prior to the start of their senior season, the Jarrards cemented their collegiate future by committing to the IUPUI, and it paid off for their mindset.

Able to compete without distractions, the duo had their best seasons in 2021-22 and guided the Class 4A Marauders to back-to-back HHC and sectional championships and 61 wins in four college campaigns.

The Marauders finished the 2021-22 season with a 22-3 record, winning 16 straight games before falling to Ben Davis, 52-50, in the regional semi-finals at Southport on March 12.

The mission for the Jarrards and other Mt. Vernon seniors this season was crystal clear – get back to regional, get back to Southport Fieldhouse.

As juniors, the duo reached the same stage and lost to senior-laden Plainfield in the regional semi-finals. In their second consecutive regional appearance, victory eluded them, once again, but it was only decided in the dying seconds.

“It was pretty good in a way. We came back to regionals, but we couldn’t win. I hate it, but it’s okay. I feel like we had a good career over the years, and I’m so grateful to my teammates and Coach Rhoades and Coach (John) Rockey and Coach Nate (Bingham),” Amhad said.

The Mt. Vernon coaching staff shares that sentiment. It won’t be easy to replace the work ethic and production the twins have provided since Rhoades and his team took over four years ago.

“When I came here, they didn’t really know me and I didn’t really know them. I told them, and all the seniors included, I owe those guys a lot because I was the new one too, and they bought into it. We weren’t all okay every day, but I think we managed to get through it all to be our best, and overall I think it really helped us,” said Rhoades.

“Leadership by example from these guys was so important. They were never too talkative, but they always tried to do the right thing.

The best thing for the Marauders was for the Jarrards to be themselves.

Although more of the social butterfly of the two, Armon has taken off statistically as a senior, averaging 16.3 points per game. The starting point guard posted 3.9 rebounds, 3.4 assists and 2.0 steals a contest, finishing with 997 career points and 119 3-pointers, 262 rebounds, 169 assists and 133 steals.

Feeding off each other’s energy, the twins were determined to put Mt. Vernon on the map, and voters paid attention to the Marauders who broke in and remained in the Class 4A top 10 a majority of the year.

“There were still people who thought we couldn’t play with the best teams,” Armon said. “That was the motivation.”

Finishing with 11-12 straight seasons as a freshman and sophomore prompted the Jarrards to accelerate their development.

“It was tough at the start, but we got through it in the end. Our first and second year, we were struggling. We didn’t win the cup. Our record was under 0.500 our first year, so it was good to keep going up over the years,” Amhad said. “We just wanted to keep proving everyone wrong.”

With every win this season, skeptics have turned into believers.

After an 87-78 loss at 4A Westfield on January 4, the Marauders went unbeaten for over two months.

Throughout, the Jarrards simply put their heads down and dug.

“Their whole family is calm and reserved, but at the same time they have definitely been leaders for example during the four years. This year I will say, especially after Christmas, I think they’ve both been a bit more vocal and showed more emotion both on the pitch, in games and in training,” said Rhoades. “Everyone saw what the main objective was and wanted to achieve it.”

Now they’re reaping the benefits, including an Indiana All-Star tour for Amhad that comes full circle on June 8 when the Indiana Junior All-Stars take on him and the seniors at Mt. Vernon High School.

Rhoades will serve as an assistant coach for the visiting Indiana Junior All-Stars.

Amhad respects his manager, but he is already making his prediction for the exhibition match this summer at home where he went unbeaten in 2021-22.

“Yes, I have to go undefeated in my senior season at my home gym. I can’t date with an L,” Amhad said with a smile. “Yeah, just like against Zionsville. I’ll look at Coach Rhoades and tell him, I told you.