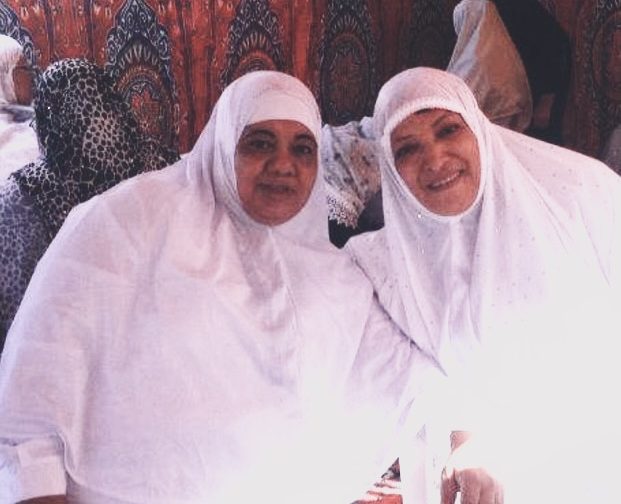 Ten years ago my mother made the Hajj – the annual pilgrimage to Mecca in Saudi Arabia to visit the House of God. For five days, Muslims reenact the key moments of the great prophets. By experiencing the place and the prayers of these messengers and by retracing their sacred events, the pilgrims deepen their relationship to the faith. Both spiritual and religious, Hajj offers a chance to ignite a deeper sense of love. It’s not just a rite of passage in Islam; it’s an honor.

On my mother’s trip to the Holy Land, she met a woman who, coincidentally, lived ten minutes away from her in Bridgeview, Illinois. They have been inseparable ever since. Every night my mother can be found in Aunt Nariman’s living room, drinking coffee at all hours, watching Egyptian soap operas, eating nuts and lamenting all that is good or bad in the world. They celebrate the holidays. They gossip about relatives. They seek advice on the most intimate matters. My mother saw Aunt’s eldest daughter deliver a child. She has become a kind of godmother for Lulu.

But it wasn’t until a year ago that I realized the importance. After spending time with Aunt and her daughters at her home, I saw what was missing in my mother’s life: community. I always thought that community came naturally. It was family, friends or neighbors. Community can be done in the gym or at work. It was smooth but generally within reach. To me. My mother did not have the same experience because despite the fact that she existed physically within these communities, I imagine that she always felt outside of them. I think for her and others like her who belong to two homes and feel estranged in both, community is very difficult to create. With Aunt, she found him.

Aunt’s story is similar. She leaves Palestine for Illinois, endures a difficult marriage and raises children in America. They were both part of large extended families, a living legacy in their homeland. With us, everyone was linked by blood or the stories of yesteryear. But living in the Midwest was a new challenge. It was lonely. In an effort to create their own future, these two women have both set sail for the greatest adventure of all: an unknown life.

My mother immigrated to Brooklyn in 1976 and within three years was marrying my father, giving birth to me and my brother, and filing for divorce. The summer months we spend in Egypt end up becoming increasingly scarce as the demands of a single working mother increase.

I still hear America on my mother’s lips, that compelling brand for a country in the making that recruits the best of the best from around the world, quintessential slogans for life:

The price of success is hard work.

You can do anything if you believe in it.

While her sisters were well into their second or third pregnancies at home, my mother left work and ran off to night school. A salary was not enough for a family of three, but to earn more money, you needed a higher degree and more certifications; it also costs money, but if it meant we could leave our rental and buy a house in a better school district with a little left over to save, it was worth it.

Welcome to the land of opportunity.

It took seven years but my mother achieved the dream. She started as an accountant and eventually became an executive in an international shipping company.

As part of the civilian R&D group this year, I set out to research the lived experience of Arab immigrants. I began a series of interviews in Bay Ridge, a neighborhood in southeast Brooklyn, one of the largest Arab communities in the United States and, ironically, my mother’s first home in America.

Focusing my research on Arab Americans, I quickly realized during the interview that those I was talking to were actually Arab Americans. This third culture, born and raised in the city, certainly did not face the same problems as my mother’s generation. They also didn’t address the issues of my generation, which was made up of over-ambitious kids frantically focused on the goal no matter the outcome. I was connecting with a third generation of children who were fluent in two cultures struggling with a particular conviction at their age.

The people I interviewed were between 9 and 26 years old. Many had never been to their parents’ homeland and yet they were cultured, bilingual, politically aware, spiritual and religious. This younger generation of Americans was deeply invested in both cultures and not interested in identifying with either. They were clearly both. I admit that at times I had to rewind the tape and slow it down to catch their phrasing and jargon – a mixture of hype, Arabic and topical. After reading hours of digital tape, I started looking for the thread. What was the right balance between invention and verbatim? How could I edit and revise to reveal the meaning beneath the text? What structures would lend themselves to a story that would not be linear, but panoramic? What was the story?

Sometimes when you’re writing a play, even if you don’t know exactly where you’re going, the reason is clear. This is why it often forces a writer to engage pen to paper in the first place. But in this case, I started with an investigation – to get intimate with a particular community in Brooklyn. There was no objective, no hypothesis, no agenda.

People often think that writing is writing, and it is, but it is also listening. Listening to the stories of this community changed me. It inspired a deeper quest to understand the American construction of Arab identity – legally, morally, and emotionally – but also the power of community to heal an individual’s soul. It became a process of exploring oneself through a collective voice. It was an honor to collect these stories, to imagine a new world, to discover a narrative and to play. If you are in New York on June 28, I will present the first draft of the Finding series. I hope you will join me.

Hailed by the San Francisco Chronicle as “a tour de force in the Bay Area theater scene”, Denmo is an Egyptian-born American playwright, actor, author, and entrepreneur. A Sundance Theater Lab and Rainin Fellowship finalist, his work has toured to international festivals in Cairo, Berlin and the Loire Valley, as well as to parks, black box theaters and universities across United States. Her children’s book Zaynab’s Night of Destiny will be published by Fons Vitae in late 2021. Her next writing project is a ten-part historical drama for Audible. Denmo holds an MFA from Naropa University. denmoibrahim.com

Extended Play is a project of The Civilians. To learn more about The Civilians and access exclusive discounts on shows, visit us and join our mailing list at TheCivilians.org.