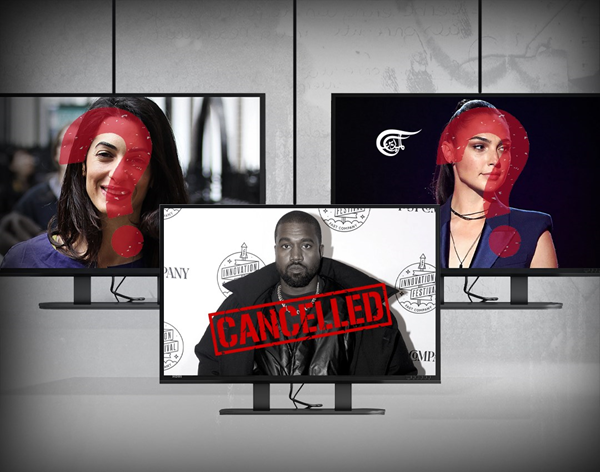 When society, the media or political actors decide who and what can be “undone”, they establish a double standard that then considers it knowledge – turning opinions into facts, irreversibly. But who holds this linguistic and ideological scanner and the power to produce knowledge in this way?

What does it mean to be truly “cancelled”? The term has transcended the realm of pop culture and “dipped” into the world of politics and social agendas. The Cambridge Dictionary defines ‘cancel’ as ‘completely rejecting and ceasing to support someone, especially because they have said something that offends you’. It is here, however, that speech plays a quite significant but subliminal role.

Discourse, defined by the cultural theorist Stuart Hall, is a mode of representation through an utterance to produce knowledge, to give meaning to the item submitted to it – to direct the way in which the subject can be evoked, according to a number of factors related to linguistics and sociology – highlighting the intersection of power.

When a society, the media, or political actors decide who and what can be undone, they establish a double standard that then treats it as knowledge – turning opinions into facts, irreversibly. But who holds this linguistic and ideological scanner and the power to produce knowledge in this way?

It also implies the term “awakened”, an informal word used to describe the state of awareness and recognition of social issues related to injustices and oppression. Here is the confusing part of this dilemma: when individuals seem to strike a chord with anti-Semitism, the whole world wakes up. When one individual strikes a chord with the occupation of Palestine, the world decides to go back to sleep.

Thus, being “cancelled” should no longer remain a marginalized label at borders and walls in the areas of a certain predefined program.

The question, however, is why cancel culture is a problem and how does it influence international affairs beyond social constraints?

DC “Superhero” Gal Gadot could very well be the face of “Israel”. She went from being an IOF soldier who might have been able to participate in Israel’s July 2006 war on Lebanon to becoming Wonder Woman in 2016’s Batman V Superman: Dawn of Justice. she was too busy modeling perfumes like Gucci and for magazines like Maxim – life as a former Miss “Israel” is a struggle, having to deal with all the fame. But hey, she’s cast as the Evil Queen in Disney’s 2024 movie Snow White — they’re not wrong with their selection.

In 2014, during the bombardment of Gaza, the former IDF soldier posted on Instagram a photo with his child with the hashtag “love IDF”.

Lebanon, Qatar, Tunisia and Jordan banned 2017s wonder woman testing after calls from pro-Palestinian activists and the BDS campaign to boycott it.

Human rights on whose clock?

Amal Alameddine Clooney is the savior of human rights victims everywhere – except those in Palestine. The Lebanese-born international human rights lawyer, a ‘beacon’ of the United Nations, was a member of the prosecution team of the United Nations Special Tribunal for Lebanon in relation to the assassination of Prime Minister Rafik Hariri and later represented Nadia Murad, a Yazidi survivor of sexual assault. violence of the Islamic State in Iraq and the founder of WikiLeaks, Julian Assange.

The Human Rights Council announced in 2014 that she would be one of three members of a commission to investigate IOF violations of humanitarian and international law against the citizens of Gaza. Hours after the announcement, her agent Stan Rosenfield, spoke on her behalf to report that she would not be on the panel due to her “heavy” schedule with “past commitments”.

Even after declining to be on the panel, Alameddine did not speak out as a human rights and criminal lawyer on the atrocities committed daily in Palestine, Yemen and Libya by government-led coalitions. West, but can take a minute to ask the UN in April about the investigation into crimes against humanity in Ukraine.

Spanish clothing brand Zara has recently come under fire after the local franchise manager set up a campaign meeting with far-right leader Itamar Ben-Gvir ahead of local elections in November.

Zara has made no comment in response to the case and calls for a Palestinian boycott, yet no one has spoken out on the issue or attempted to drag it into the cancel culture race. The German sportswear company, Puma, is not only the main sponsor of the Israel Football Association (IFA), but has a factory on occupied land in Palestine.

Still, it goes without saying and adding that Kanye West has been attacking and verbally insulting a variety of different sectarian and ethnic groups lately, one need only observe his Twitter account to realize the extent of his utter frenzy – of his own people to his ex-wife. It all came down to one tweet that not only opened the doors to hell, but cost the rapper-turned-designer his career.

People have stopped buying Kanye West’s Yeezy or Yzy brand in retaliation for his recent Twitter comments, but people are still pouring money into Puma and Zara and other brands whose hands are dirty from the blood of the Palestinians and drowned in the money of the Israeli occupation.

She comes to wonder then, why it would be normal to cancel Kanye West for his anti-Semitic remarks. Yet it is not acceptable to write off Donald Trump for endorsing Israeli aggression, or Gal Gadot for deliberately ignoring the war on the children of Gaza or promising a smear campaign against President Vladimir Putin for the war in Ukraine.

This raises an even deeper question: how come the international community goes into a storm to cancel Russia but does not return the favor to call out and cancel Ukraine for excluding North African and Arab students from trains leaving the country when war first broke out? out? How come Poland is canceling Pink Floyd’s Roger Waters for his stance on Palestine when Saudi Arabia is able to welcome hundreds of celebrities to perform and vacation there as it commits war crimes against Yemenis on a daily basis?

The speech has become exploited by Israeli settlement as more than a weapon to target those who oppose it, portraying them as “anti-Semitic”. Yet those who campaign for colonial rule, killing Palestinian children by the hundreds, side with the “beacon of democracy”, as former Israeli Prime Minister Naftali Bennett called the occupation. Anti-Semitism has been twisted and twisted to misrepresent the equivalent term to anti-Zionism, thereby closing the curtains on “Israel’s” humanitarian crimes and stopping any criticism of the Zionist entity.

It’s quite funny, tragic in fact, how the West is entrenched in a double standard for almost most of its political and social affairs. US ‘nullifies’ Iran for alleged human rights abuses as US commits its own streak in its own land and abroad.

Double standards continue to be seen throughout the international community. It is certainly ethically unacceptable and immoral to be an anti-Semite. But why is it “acceptable” to continue to live and pay money to companies steeped in colonial practices, and to shine a light on controversial figures in any field who openly and publicly support the murder of Palestinian children?

Kanye West should be canceled for his rants, but so is Gal Gadot for her blatant anti-Palestinian stance and extremist rhetoric. Amal Alameddine Clooney should be the next not to have exposed the crimes against which she built her career a lot.

Selective solidarity, or rather selective humanitarianism, is what this embodies. Leaving people out of society is as easy as they say, as is labeling them, but not within the framework of a single standard. It is a firm social responsibility to hold individuals accountable for offences, not to choose who should be detained and who not.