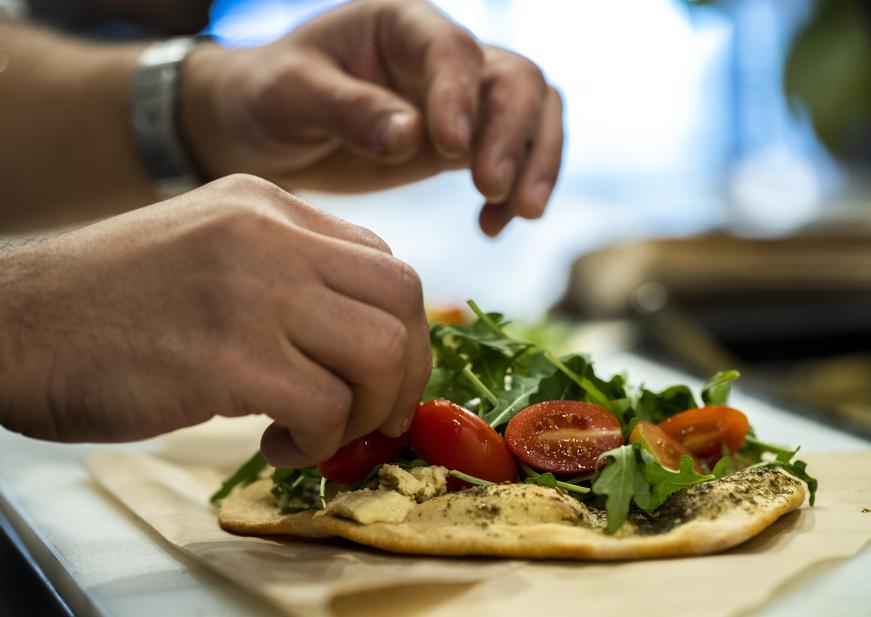 When Bay Area chef Reem Assil designed her bakery, Reem’s California, she knew she wanted to capture the warmth of an Arabian bakery around the corner, where locals could gather over freshly baked breads. A za’atar-covered man’oushe, a staple of Lebanese street food and a constant during Assil’s childhood on the East Coast, seemed fitting as a bakery icon. But she also wanted the food to celebrate California.

As a result, his man’oushe dough is made with grain sourced from Central Milling in Petaluma, slowly risen like Northern California’s famous breads and topped with local produce. And Assil is not alone in diversifying. A handful of Bay Area chefs and bakers combine techniques and flavors from Californian and Middle Eastern cuisine to create complex, deeply flavored breads. At Lulu and Badan of Berkeley and Mishmish of Oakland, these breads have become popular items on their respective menus. For some, the creations represent a return to ancestral traditions; others incorporate ingredients that make breads vegan or gluten-free to accommodate more diets; and others still go beyond their own cultural backgrounds to create dishes that represent the immigrant experience in California.

“I feel like Arabic unites us in a way, because we come from Arabic-speaking countries and that’s the land we used to live in, and here are the traditions that we brought, which are very important to me. to be proud,” Assil said. “But it doesn’t have to compete with our Oakland celebration and California celebration. These things are intersectional.

Assil got into baking during his three-year stint at Arizmendi Bakery from 2010. While learning the ins and outs of sourdough making, Assil realized that his ancestors also made fermented breads, not the more common industrial, quick-rising breads, such as pita bread. which are often associated with Southwest Asia and North Africa – a geographical term that many people like Assil prefer to the Middle East due to the latter’s Eurocentric origins. Before globalization and political destabilization affected access to flour in the region, naturally fermented bread was more common than quick yeast bread. Even today, bakers in Lebanese villages still use their own starters and ground grains for saj, or Arabic bread.

“The irony is that the more I learned about Californian cuisine, the more I realized that my ancestors did too,” Assil said.

It became the inspiration behind Assil’s man’oushe at Reem’s California, the groundbreaking restaurant she opened in Oakland’s Fruitvale neighborhood in 2017. Her man’oushe is a cross between lean Lebanese styles and more hearty Palestinians and makes a fluffy flatbread but still has a gooey, chewy bite and is substantial enough to support toppings like avocado or sumac-coated chicken. She adds California white rye as a nod to local sourdough traditions. “But time is the real secret,” she said, referring to the 48-hour cold fermentation process for the dough. The flat discs are coated in olive oil and za’atar before being cooked at high temperature for a few minutes in a pizza-type oven. Before the days of brick and mortar, Reem’s team carried a saj, a convex metal griddle, to farmers’ markets to bake bread.

Similarly at Lulu, chef Mona Leena’s California version of weekday man’oushe serves it flat, pizza-style, with za’atar, labneh and an egg on top. Meanwhile, his weekend man’oushe comes out of the oven smaller, fluffier and meant to be dipped and eaten with California-influenced mezes like butternut squash muhammara and roasted beet hummus. The latter bread is a style commonly found in Palestinian homes, consisting of small balls of high-hydration dough thrown directly onto the olive oil-covered pan in which they are baked. Leena also showcases her Palestinian roots in her breads and pastries like sumac. focaccia or a Tcho chocolate brownie topped with a tahini caramel.

Some chefs adapt traditional dishes to their own dietary needs and to their gluten-free or vegan customers. Michelle Nazzal of vegan pop-up Mishmish uses almond milk rather than dairy in her ka’ek, a Jerusalem-style sesame bun rarely found in the Bay Area. The oval ring-shaped Ka’ek is usually torn into pieces to be dipped in za’atar or cheese; Nazal also makes a non-dairy cheese from tofu, nutritional yeast, and coconut oil.

Her cooking is heavily influenced by her grandmother, who immigrated to San Francisco from Palestine in the 1960s and cooked many classic naturally vegan vegetable dishes. But during family gatherings, Nazzal often lacked meaty central dishes. As a result, she began experimenting with seasonal produce, allowing her to make versions of the same dish. In a traditional chicken dish cooked on bread, Nazzal uses oyster mushrooms. While paying homage to his family’s cooking, Nazzal said it would be a lost opportunity not to mess with California ingredients.

Similarly in Badan, which opened during the pandemic inside the Berkeley Organic Market & Deli, owner Hafez Alsaidi combined grains from his childhood in Yemen, such as sorghum and millet, to create a gluten-free flatbread. served one day a week. Alsaidi remembers that every household in his village used all available barnyard grain for homemade breads, and he was inspired to create a new style of flatbread in Badan. Her creation, which satisfies her gluten-free customers, features chia, nigella and flax seeds to celebrate the abundance of ingredients in the Bay Area. Plus, he uses unprocessed whole-wheat flour from local supplier Community Grains for his daily vegetarian wrap topped with hummus and za’atar.

“We pretty much lived off our land or the vegetable garden, so I went back to thinking about how my grandparents raised me to find something new,” he said.

For many, defining what is Californian is not just about the ingredients used in creating these breads, but also about recognizing the state’s diverse cultures.

At Reem’s, Assil’s man’oushe is a repository for stories of people working and eating at the bakery and where they come from. The man’oushe el cornish, topped with corn and cotija cheese like a Mexican elote, celebrates the immigrant communities of Mission and Fruitvale (where Reem’s two locations operate) and California’s historic connection to Mexico. Arab food is meant to be flexible, Assil says, and sharing how it changes by country or across the diaspora can help push some of the region’s limited understanding of food to the United States.

“We shamelessly use food to tell a story about land, place and people,” Assil said.

Sinn Féin and the re-greening of Ireland