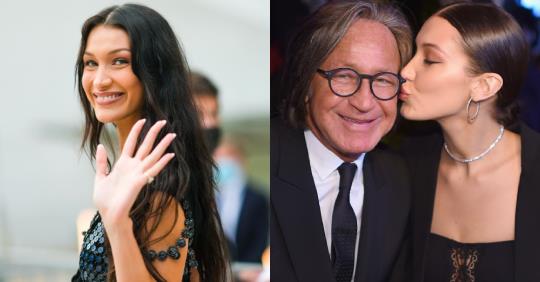 In March, Bella Hadid landed her first acting role on the Hulu series, Rummy, which follows the story of first-generation Egyptian-American Ramy Hassan and his family. But when Bella worked on the show, it reignited her desire to have been raised in her “Muslim culture.”

For those unfamiliar with the 25-year-old’s background, she was born in Washington, D.C. to Dutch model Yolanda Hadid and Palestinian real estate developer Mohamed Hadid. While half-Palestinian, Bella opened up about being raised apart from her culture and still yearning for it.
“I was with my Palestinian side [of the family in DC]”Bella revealed in a new interview with QG. “And I was extracted when we moved to California.”

Bella grew up in Santa Barbara, California with her older sister, Gigi, and younger brother, Anwar, where she was usually the only Arab person in her classes. As a result, she was subjected to “racist slurs” as a teenager.

“I could never see myself in anything else, so I tried to sit down,” she told the publication, adding, “For so long I’ve missed this part of me, and it made me really, really sad and lonely.”

By the time Bella turned four, her parents, Yolanda and Mohamed, chose to divorce. While they were no longer a couple and living apart, they both remained based in California for their children.

While on the set of RummyBella shared that she felt emotional, even in tears, after being surprised with a “Free Palestine” t-shirt from the TV show crew.

“I couldn’t handle my emotions,” she said. “Growing up and being Arab, it was the first time I was around like-minded people. I was able to see myself.”

And her friendship she has built with the show’s main star, Ramy Youssef, has seen her feel more comfortable exploring her own faith.

“There was one time when Ramy came during Ramadan and allowed me to pray with him, and it was one of the happiest moments of my adult life.” Earlier this year, Bella explained that she felt like she was missing out on her heritage, after having her nose job done at the age of 14.
“I would have liked to keep the nose of my ancestors”, she explained in an interview with vogue. “I think I would have grown into it.”

Bella is set to appear as a recurring character in the third season of Rummypremiering on September 30.

6 pop culture highlights from across the region