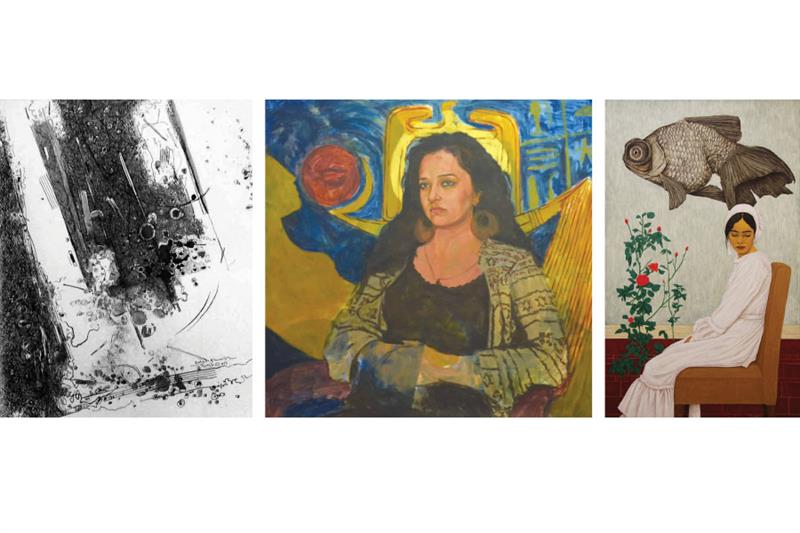 Chaired by Popular Dean of Faculty Ahmed Mohie, the remarkably well-organized three-day event brought together artists and academics from Palestine, Lebanon, Sudan, Jordan, Iraq and France. It included a collective exhibition of 120 graduates and teachers with a folk dance for the opening.

Among the highlights of the latter was a 35 x 50 cm abstract drawing in ink on paper by famous artist and graphic design teacher Salah Al-Meligi, a veteran of the Luxor and Zamalek schools of art. It features lines, blocks and circles reflecting a far-fetched political theme. â€œThe rise and fall, or the construction and deconstruction of a block or a line, caught my mind when Egypt was under the control of the Muslim Brotherhood, before the revolution of June 30, â€says Al-Meligi.

Another highlight is the three-by-three-foot acrylic portrait on canvas of Beshoy Zareh, a Luxor graduate and Assiut’s assistant professor, which appears to mimic the portraits of the Fayum mummy. â€œI am greatly inspired by the ancient Egyptian and Coptic heritage of Luxor,â€ he said. “This portrait is inspired by Nut, goddess of the sky, and her custom of devouring the glowing sun at the end of each day to give birth to the white sun at the start of the next.”

On the program for the second day, a workshop by designer Amr Fahmi and a conference by Al-Meligi. Luxor 2009 graduate and current teaching assistant Ahmed Saber, who lives and works in ‘this open museum’, finds it a blessing: ‘It always inspires me with ways to rework ancient symbols in a modern visual background. My graduation project, “a 7.5m by 3.5m mural that places the goddess Maat in the crowded city streets,” was inspired by the goddess of justice, and my work in from there was also inspired by the symbols and techniques of ancient Egyptian art. like the modern traditions of Luxor residents.

Saber and Zareh both lamented the lack of strong galleries in Upper Egypt.

At the closing ceremony, held at the Luxor Cultural Center, University President Mohamed Azouz announced that the celebration will continue, with new events on the first Thursday of each month. Former faculty dean and Luxor-based artist Mohamed Orabi praised the Luxor International Painting Symposium, whose 14th cycle ended on December 20, highlighting its contribution to Luxor’s cultural life. Another important initiative, inaugurated by the Minister of Culture Ines Abdel-Dayem on December 25, is the Hassan Fathi village restored by UNESCO in Gorna, first created by the great architect in 1948, on the west bank of the Nile. It houses an old theater, a gallery, a souk and a mosque.

Back in Cairo, the â€œSafe Havenâ€ exhibition by Luxor University professor Ali Hassan (November 13-December 9) was one of the most popular exhibitions of the past year. Graduating from Zamalek University in 1997, Hassan chose to settle in Luxor, and much of his work is inspired by the city. His 2016 exhibition at the Mahmoud Mokhtar Museum, â€œEarth Sequenceâ€, focused on the landscape to show the rituals of farmers and their connection to the land in an abstract style.

“Safe Haven” presented 48 oil paintings, mostly large, on paper and canvas, mixing realistic and expressionist – even fauvist – elements to criticize the treatment of women in Upper Egypt, the refuge being the prison in which many of them are confined. The project began in June 2020 after one of his students, Arwa, started telling him about her dreams, describing the restrictions her typical southern family placed on her.

One painting shows a girl with a motorbike – Arwa always wanted to drive one – standing still in a room. Other paintings show the aquarium fish and chickens the young girl raises, transformed into fierce monsters as they appeared in her nightmares. â€œIt happened that in the morning Arwa woke up to find dead fish that jumped out of the glass container to the ground,â€ Hassan says. â€œAnd that’s exactly what she wanted; breaking the boundaries of the box she was confined in to love.

In Temporary Marriage, the young girl can be seen in her grandmother’s wedding dress: â€œIt is one of the young girl’s dreams to be married and to wear a white dress like her grandmother’s. mother on the old photos. But in her nightmares, the wolves tore her from her body. For this painting, I had the dress drawn by a seamstress from Upper Egypt before my student wore it as a model for me.

Another Luxor-inspired event is the first solo exhibition by Jordanian artist Mohamed Al-Jalous at the Picasso Gallery, â€œThe Magic of the West Bank of Luxorâ€ (January 9-30). Al-Jealous painted cities like Al-Salt, Nablus and Jaffa.

* A print version of this article appears in the January 6, 2022 edition of Al-Ahram Weekly.