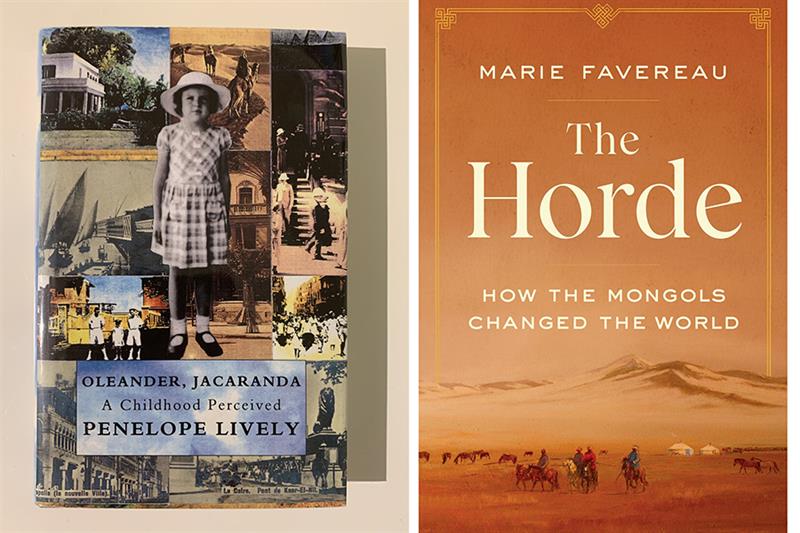 Born in Cairo in 1933 and now approaching her ninth decade, English writer Penelope Lively published her latest book this year, a collection of short stories that contains pieces perhaps inspired by childhood memories of her life in Egypt.

She lived in Cairo until her family left at the end of World War II, and although she did not become a professional writer until many years later, she often returned to memories of the first 12 or so years of her life she spent in Egypt. These provided material for a book of memoirs she published in 1994, exploring themes such as the relationship between individual experience and world events and the persistence and transformation of later childhood memories. in life.

Titled Oleander, Jacaranda, A Childhood Perceived, the memoir chronicles Lively’s early life in Egypt. However, since the memories it contains are drawn entirely from the pre-adolescent years, the book is also an exploration of the gap between childhood and adulthood in what Lively calls a process of “double exposure.”

Memories of her childhood in Egypt often return as images in adult life, she says, and one of the memoirist’s tasks is to compare these mental images, sometimes surprisingly vivid despite the passage of years, with what the adult knows of their larger context and place. in a developing story. The book is therefore an exploration of the “nature of the perception of childhood”, insofar as this can be recovered from an adult point of view, “a view of Egypt in the 1930s and 1940s through the eyes of a child growing up in the country, and an examination of “how a child sees and how that corresponds to what has been seen”.

Lively’s first photo is from a trip. “We are driving from Bulaq Dakrour to Heliopolis,” she wrote, her memory of that day extraordinarily vivid even nearly half a century later and carrying with it something of the intensity of childhood. “The leather of the seat sticks to my bare legs. We take a road lined on both sides with oleanders and jacarandas, alternating touches of white and blue.

“We should have been visiting friends, driving from our home six kilometers west of central Cairo to Heliopolis, the eastern suburbs, a journey that meant traversing the city – slow and bumpy sailing amid trams and donkey carts and pedestrians,” provides the adult writer as context, while pondering “the irretrievable child and the strange relationship between his mind and mine. She is me, but a me that is only accessible through those moments of being that miraculously survive: the stranger within.

It is a form of double exposure, a pristine image springing from childhood memories and an adult’s attempt to understand it by placing it in context, framing it with dates, times and destinations, when the trip must have taken place, how old the child who took it must have been, where she was going or coming from.

However, there is also another form of double exposure in the book when Lively decides to try another method of recovery, this time revisiting places from her childhood not only in memory but also in fact. “Over the years it had somehow never been possible” to return to Egypt after leaving it for the last time in 1945, she wrote, “either too expensive or impractical. But the 1980s brought the expansion of Egypt’s tourist industry… and that’s how I returned as a tourist [spending] three days in Cairo during which we had planned the search for Boulaq Dakrour.

As anyone who has revisited places from childhood in later life knows, they are, and are not, like the retained mental images of them, recognizable unless there has been some reconstruction major, often very similar, but never quite the same. People are different even though the landmarks aren’t, and even though the landmarks are still there, they don’t mean the same things.

Lively’s childhood home, rented when her father took a job at the National Bank of Egypt and the family moved to Cairo, was “cream stucco with green shutters, a flat roof and a wide veranda covered around most of both sides. . The front door was quite majestically ornamented, with a flight of steps leading up… It had been built in the early years of the century, with its two neighbours, all sumptuously surrounded by gardens and sharing an access path screened by a high hedge .”

Returning to Egypt 40 years later, the words “Bulaq el Dakrour… jumped out at me from the street signs,” writes Lively. “It was no longer a place but an area, part of the sprawling extension of Cairo. The teeming brown sprawl of the city had engulfed the fields of bersim and sugar cane” recalls childhood as well as “the villages and presumably our home”.

Taking a taxi from central Cairo and driving through Mohandiseen, she eventually found the house, “battered but alive, the old shutters still on most of the windows, the large veranda at the back”. But “from the surroundings, everything had disappeared. The fields, the village, the palm-lined canals. Our garden with its thirty-foot eucalyptus trees, lawns, ponds, pergolas. All that remains is the house, firmly attached. Somehow it wasn’t sad, but oddly exhilarating. I didn’t expect him to be there at all.

MEMORIES: Later chapters of the book contain further images from Lively’s Egyptian childhood, similarly using them to reflect on the images that can accompany individuals throughout life and how understanding of their meaning changes.

There’s a visit from a snake charmer, for example, something that probably wouldn’t happen now that struck the child who witnessed it as introducing a note of dissonance into his parents’ otherwise practical life. .

“One year, another ritual took place – an esoteric form of spring cleaning,” writes Lively. “The snake charmer has come. He was brought from Cairo by my father in the car and immediately taken to be searched by the servants, who executed him, and in no way challenged by the snake charmer, who was waiting for him. Everyone knew – including the snake charmer – that the lower practitioners arrived with their prey concealed on them, to produce with panache when the time was right.

“He started with the garden. Walking in front of us, he was singing softly, apparently to himself. He stopped, reflected. Then would continue, pause again. The singing would get louder. And then he would pull a skinny arm out of the sleeve of his galabiyya into the foliage of the pergola, or onto the overhanging branch of a tree, and there would be a snake, whipping and thrashing in his grasp… with all the world wisely speculating as to how it was done.

There are also fewer domestic memories, used by Lively to question the extent of the understanding she had of her social position and events in the world around her while growing up in Bulaq’s household. Dakrour.

“We were English. I was English: I knew that… It was of capital importance – one was never allowed to forget it – but what it meant, I could not have said, ”she writes . “I saw Cairo cosmopolitan and polyglot. I recognized the difference and the distinctions – the poverty of the fellahs, the luxury and flamboyance of the shops and cafes, the various rituals of the place, from the call of the muezzin to the social exchanges of the Gezira Sporting Club or Shepheard’s Hotel – and I perceived it all as an unchanging state of affairs, requiring observation but no explanation.

“It was European Cairo that I knew best… a place of cultural confusion [where] I was beaten all my childhood by nationalities and allegiances. British, French, Greek, Syrian, Lebanese, Turkish… I put them in the only context a child has – the personal context – and sorted them in some sort of order. The British were us, and most of the people we knew well. The Egyptian was the whole world, the myriad faces of the city, of culture. French was the fragrant, chauffeur-driven mother of a wealthy family we sometimes visited…Greek was the grocery lady near the villa we had one summer in Alexandria.

As the child’s gaze gives way to that of the adult and Lively reviews her childhood memories, she is struck by the unconditional way in which her younger self has accepted the surrounding social order, part of childhood innocence, she assumes, when state affairs that are the result of historical processes – British occupation and foreign economic exploitation – are generally accepted as natural, or would have was if Lively’s younger self hadn’t also had a tendency to reflection.

It’s not only that Lively wants to compare what she saw then to what she knows now, often a humbling experience, but also that even then she believes there were “sudden cracks in [childhood] self-absorption,” revealing glimpses of ignorance.

Recalling summers spent in Alexandria, another bustling city revisited later in life and found greatly changed, she thinks of “beaches that reflected the complexities of class and culture. Stanley Bay was eye-catching and multicultural… Sidi Bishr n°1 was plebeian. Sidi Bishr No. 2 was dashing and classy. Sidi Bishr No. 3 was even classier, and that’s where my mother tried to make a beach cabin every summer.

It would be saying too much that we mostly remember moments of dissonance – more often than not these are simply innocent pleasures like a visit to the Pyramids, tea at Groppi, cakes from Baudrot in Alexandria in French ribbons , or a visit to the Cairo Zoo where the keepers allowed children to feed the elephants peanuts in exchange for a five piastre piece. But the dissonant moments when something important seems to be happening behind the scenes elicit particular wonder.

She recalls a trip to Palestine in the summer of 1942, when the family was allegedly put on a train bound for Jerusalem to prevent ‘the shutter’ from happening in Alexandria as Rommel’s troops advanced on the city. from the Libyan border, to be stopped. by the Battle of Al-Alamein in November. Even then, she felt something was happening that would eventually cut her off from the world of her childhood.

Palestine meant “grey-green hills with olive trees and rocky outcrops. Miles of orange groves, seemingly growing in the sand”, but no worries about what the future might hold despite the political situation, beyond the reach of a child’s concerns and presumably carefully hidden by the adults who accompany him .

Thinking back to these childhood images, Lively says that while a child very often sees things for the first time and is tied to the intensity of their perceptions, what the adult provides in thinking back is context. or double exposure, helping to make sense of experiences that, though deeply felt, could not have been fully understood at the time.

*A version of this article appeared in the February 10, 2022 edition of Al-Ahram Weekly.

Unpacking the Toxic Culture in Schools and Communities