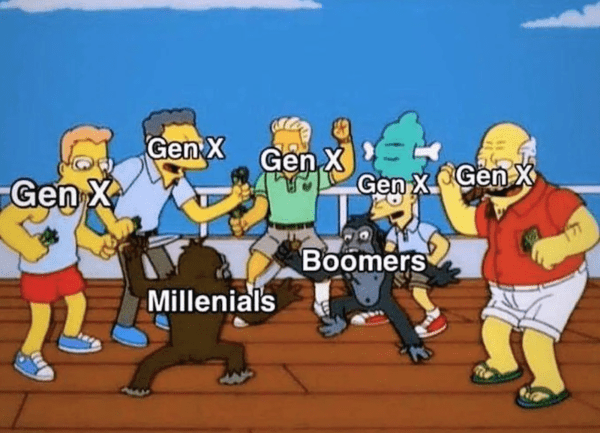 20 Hilarious Gen Z Memes That Sum Up The Cultural Divide

Generation Z is the newest group of individuals moving the world forward. Widely recognized as being born between 1995 and 2012, these people are the future. They were born into a very different world than other generations, like millennials and older baby boomers. Most think Gen Z has it easy. They live in a world where technology has never been more accessible. Everything they could possibly want is close at hand. In saying this, they also address climate change, the rising cost of living, and a planet on the brink of World War III. Luckily, they have a good sense of humor, as these Gen Z memes illustrate.

It’s no surprise that the first memes appeared during the early years of Gen Z. With the internet and social media becoming huge, memes are all the rage today. Anything controversial or funny turns into a meme within hours. Many of these memes poke fun at Gen Z and the other generations that came before them.

So if you want to laugh at the expense of Gen Z and the cultural divide between them and other generations, read on.

2. Do you have the new egg carton? 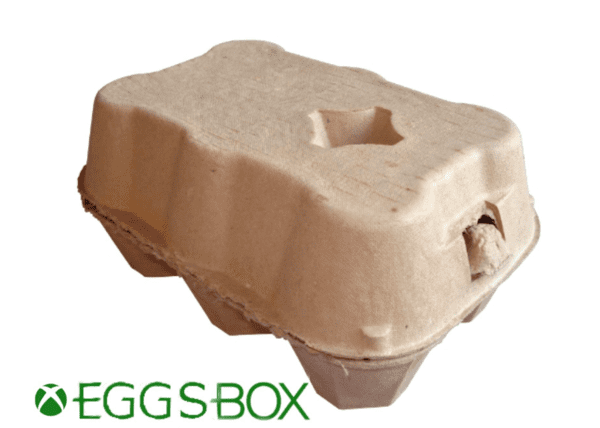 Gen Z humor at its finest. It’s definitely a meme that the older generation won’t understand.

3. The price of strawberries 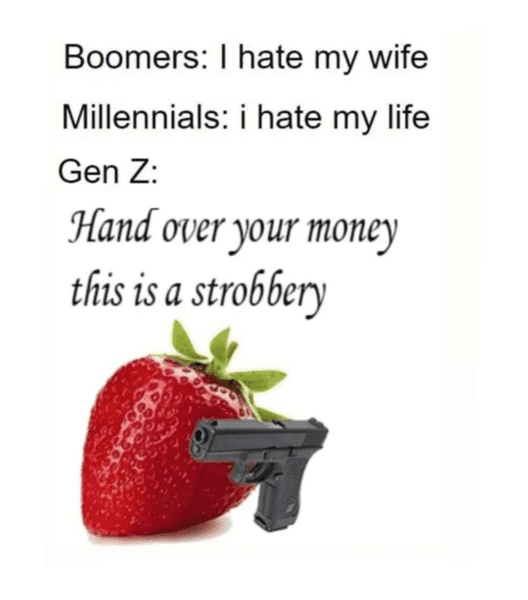 While baby boomers and millennials have their own issues to deal with, it’s the cost of strawberries that’s impacting Gen Z. It’s a tough time for the younger generation. 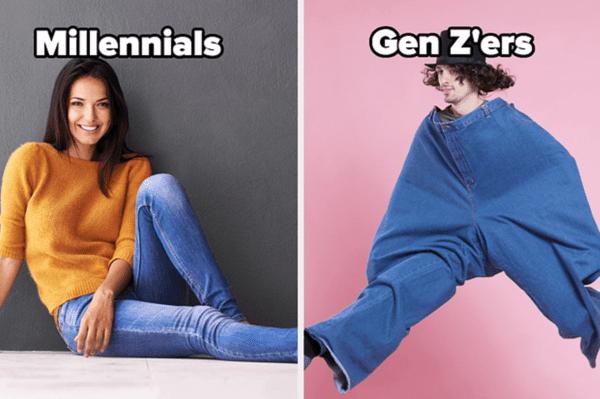 This is an apt meme illustrating the fashion differences between Millennials and Gen Z. 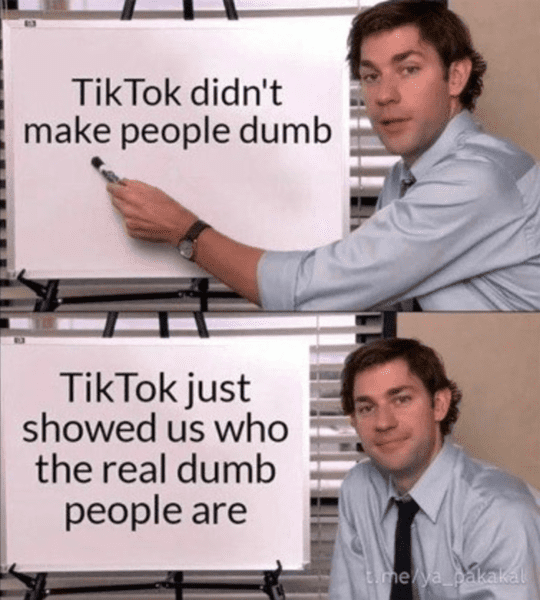 TikTok is one of the social media platforms that the Gen Zer generation loves. But many wonder if it made us a little dumber, as this funny TikTok meme discusses. Extra points for using Office. 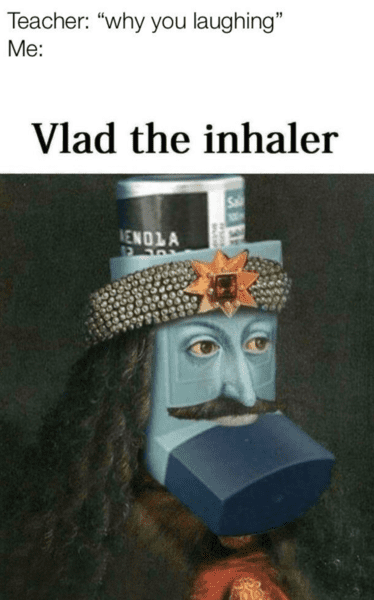 Here’s some classic Gen Z humor. Vlad the Impaler as Vlad the Inhaler. To find? 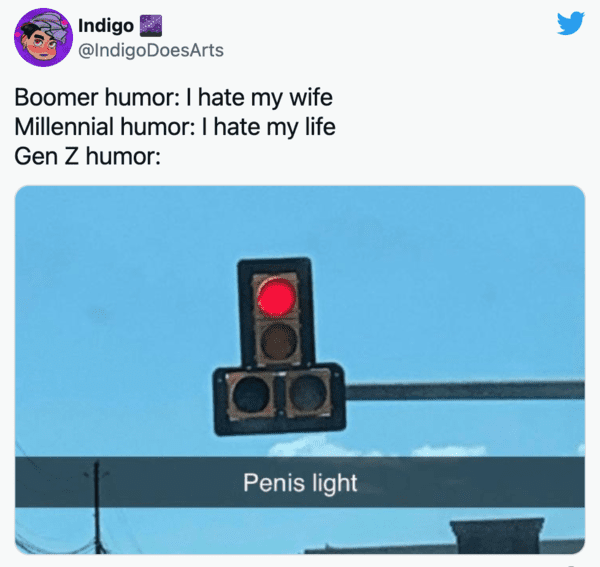 8. When Anakin turned to the dark side 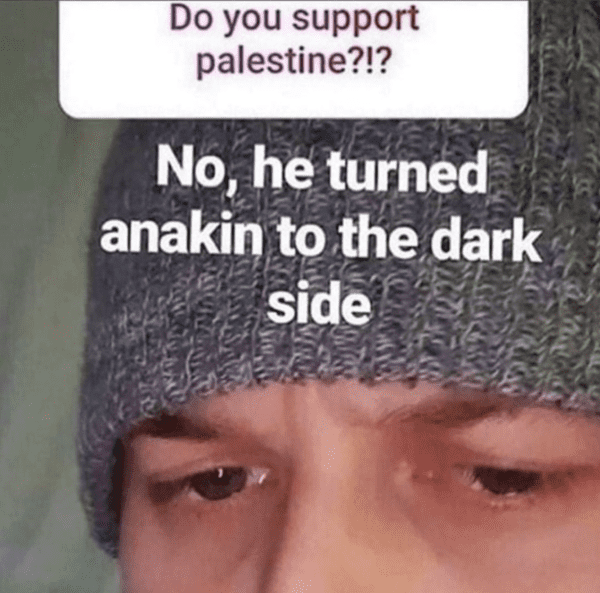 When you confuse Palpatine with Palestine. A little Gen Z humor for you here. 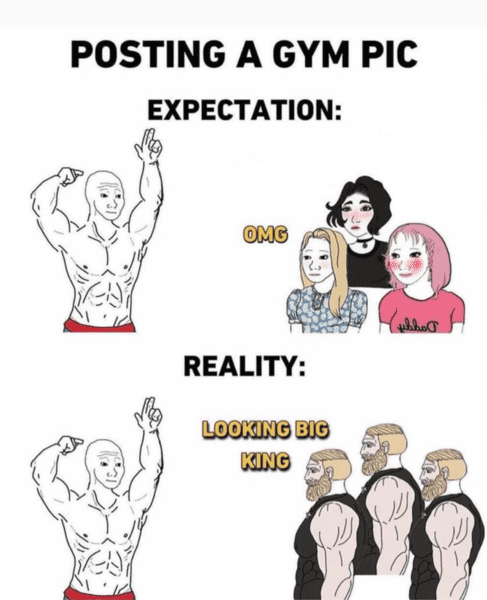 This is a pretty accurate description of what happens when men post gym pics. The brothers love it. 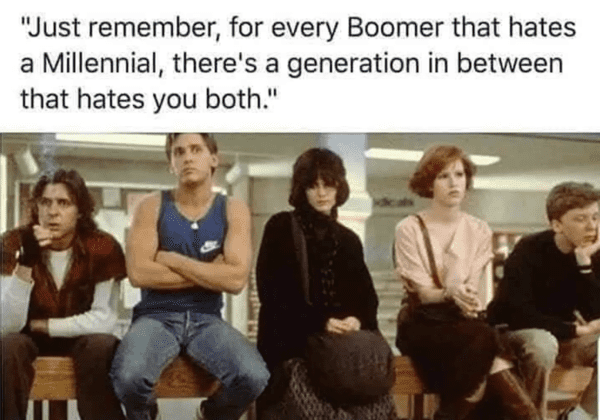 While Gen Z is happy to poke fun at those who came before them, spare a thought for Gen X. This age bracket is wedged between baby boomers and millennials. Times are tough for Generation X. 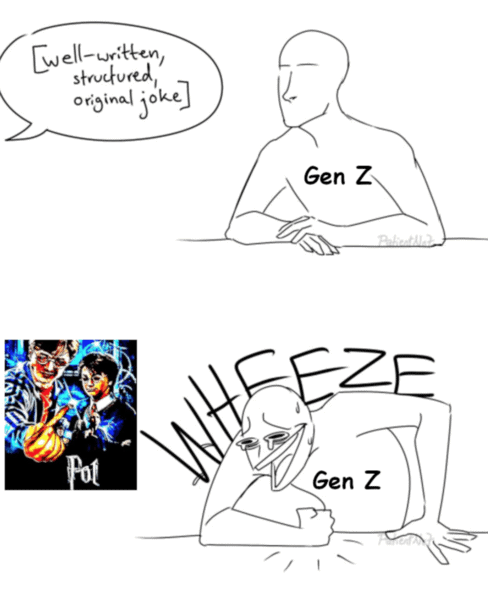 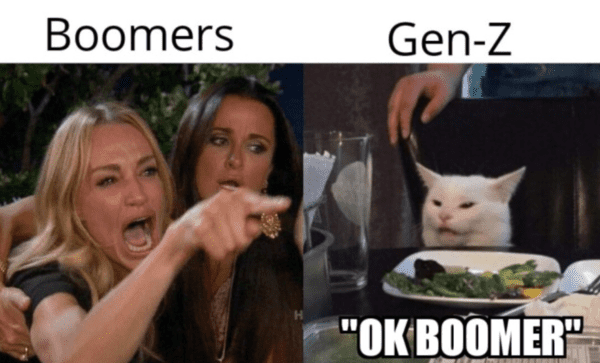 The “Ok Boomer” meme has become one of Gen Z’s favorite ways to silence the older generation. One of the best incorporates the phrase Ok Boomer into another meme, known as the “Woman Shouting at Cat” meme. 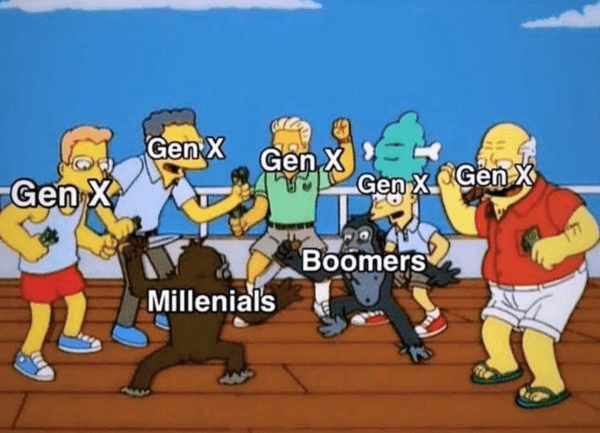 Take a classic scene from The Simpsonsthis meme features Gen Z urging baby boomers and millennials to fight back as they bet on the outcome. 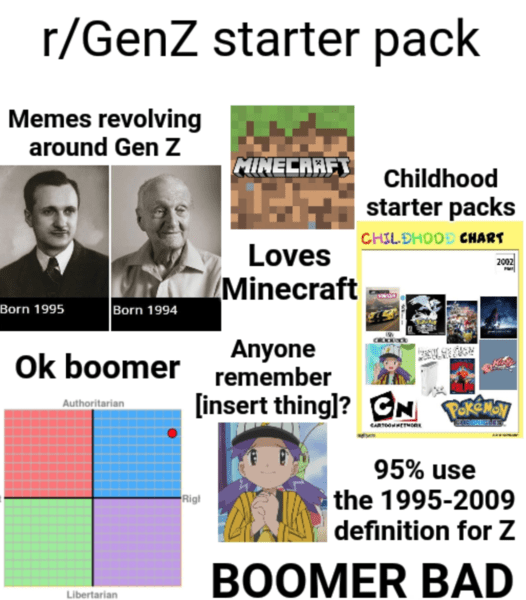 15. The Generation of Nihilism 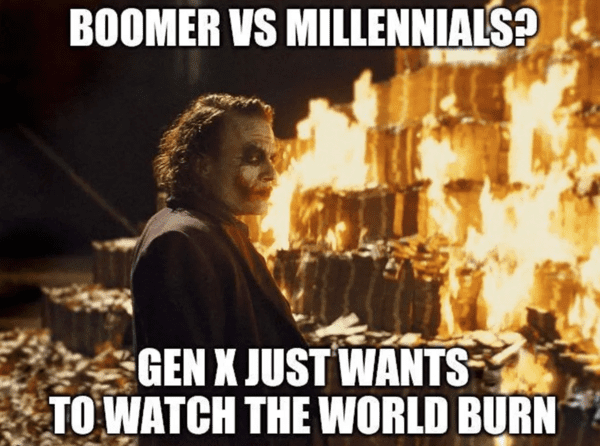 While Gen Z tries to save the planet, Gen X just wants to watch the world burn. 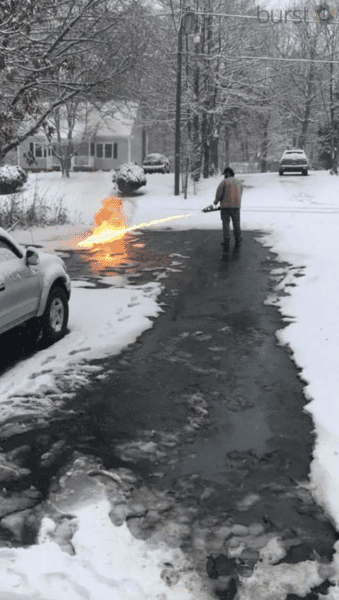 This is how Gen Z goes about cleaning snow off the road. 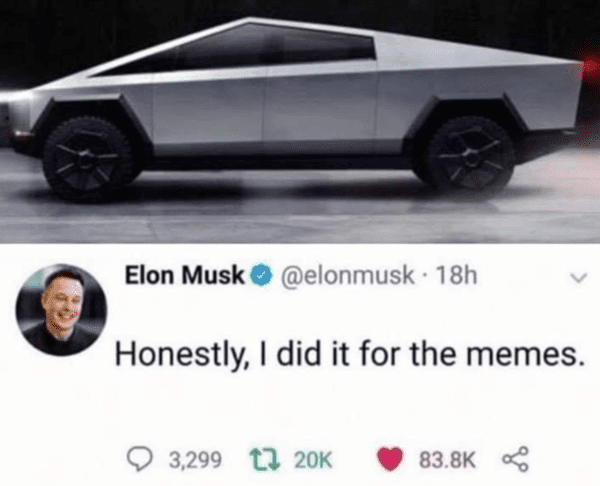 Elon Musk is trying to fit in with the younger generation by making meme jokes on Twitter. 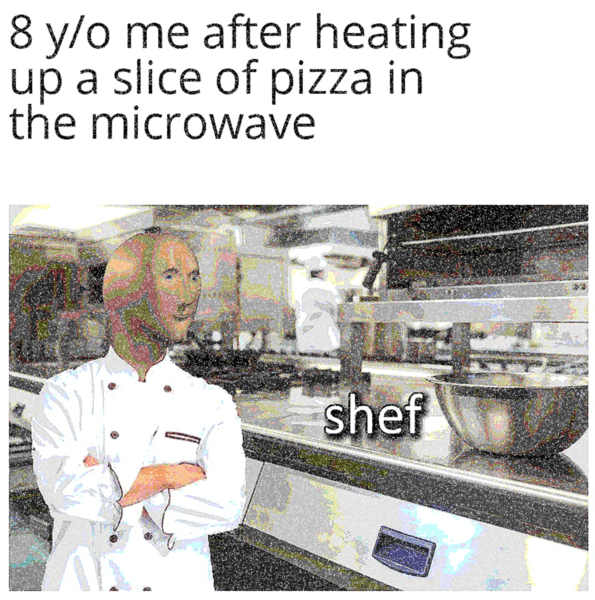 Young people today have a different view of cooking. The microwave is Gen X’s best friend in the kitchen. 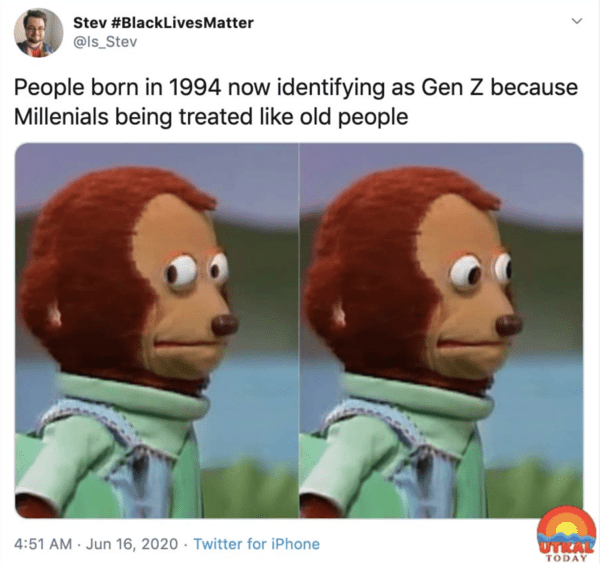 When Millennials get tired of being called old and try to pass themselves off as Gen Zers. 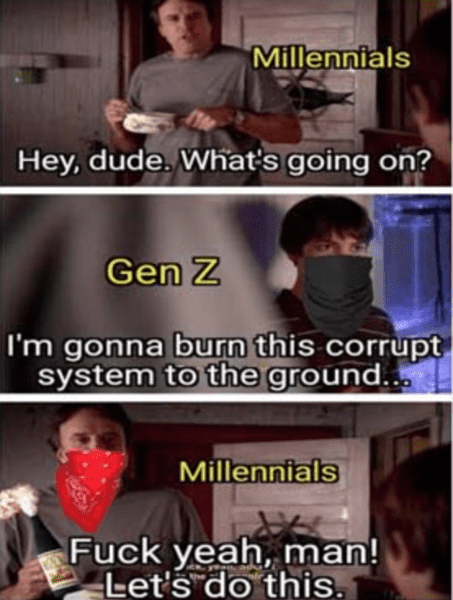 Sometimes Millennials want to feel young again and will do whatever it takes. Let’s burn this corrupt system to the ground!